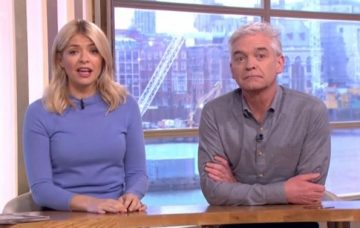 This Morning viewers disappointed by stance on Ant McPartlin’s arrest

Both GMB and Lorraine addressed the incident on Monday

This Morning viewers have voiced their surprise and disappointment after the show failed to address Ant McPartlin’s arrest on Monday’s show.

The 42-year-old presenter was arrested on suspicion of drink-driving in South West London on Sunday afternoon, after his car was involved in a collision with two other vehicles.

He has since been released under investigation as inquiries continue.

Holly Willoughby, 37, and Phillip Schofield, 55, did not address the arrest throughout Monday’s show, which left some fans a bit confused and asking why the programme had ignored the day’s biggest showbiz headline.

Both Good Morning Britain and Lorraine, which air prior to This Morning, had covered the arrest story.

One viewer tweeted: “Guaranteed Holly and Phil will ignore the Ant McPartlin news and not mention it at all. Had it been any other celeb it would have been spoken about.”

Another said: “Elephant in the room this morning on ITV. WHY hasn’t Ant been mentioned?”

A third added: “Oh #thismorning not mentioning Ant then… thought they would lead with that as it was on #gmb news & discussed on #lorraine…”

Ant was involved in a collision with two other cars while he was driving his Mini in Richmond, West London on Sunday, and was arrested at around 4pm after failing a roadside breathalyser test.

A Metropolitan Police spokeswoman said that he was “taken to a south London police station for questioning and has since been released under investigation.”

Police previously confirmed that a number of individuals were treated at the scene for minor injuries, and a child passenger from one of the cars was taken to hospital to be checked as a precaution.

“A number of individuals were treated at the scene for minor injuries only.

“A child passenger from one of the cars has been taken to hospital for a check-up as a precaution.

“A 42-year-old man was arrested at the scene on suspicion of drink-driving after failing a roadside breathalyser test.”

Following Ant’s arrest, fans have questioned whether his weekly programme, Ant and Dec’s Saturday Night Takeaway, will air as normal this weekend.

ITV has yet to comment on the programme, which is scheduled to air live on Saturday at 7pm.

Entertainment Daily has contacted Ant’s representative, who is currently offering “no comment”.