This Morning's agony aunt Vanessa Feltz lost her temper with a caller today, during a segment on relationship dilemmas.

A man calling himself Pete contacted the show hoping for some advice - but instead got an earful from an angry Vanessa who accused him of "destroying" his marriage. Read more: Holly Willoughby giggles as This Morning guest describes how her lesbian pugs have sex

On Thursday (June 6), a man described how he had fallen out of love with his wife - the mother of his two kids.

However, when he told hosts Phillip Schofield and Holly Willoughby that he'd been "forced to cheat" because he was unhappy in his marriage, Vanessa saw red.

The 57-year-old presenter, whose own husband left her for another woman in 1999, felt compelled to give the caller a piece of her mind. 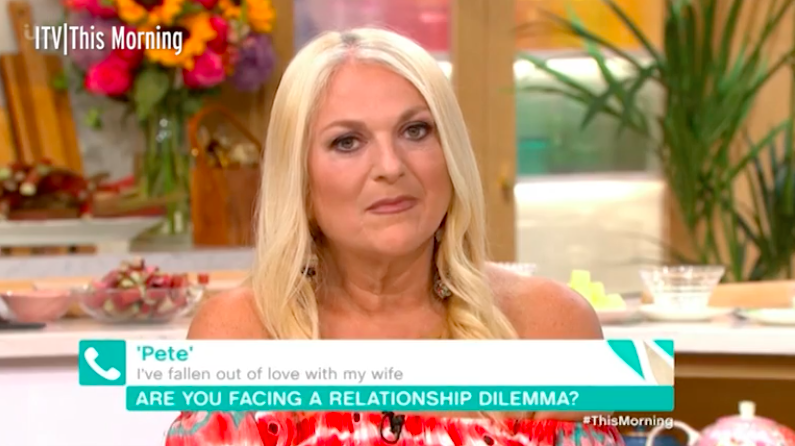 Expecting some advice about how to dump his wife, Pete confessed things had fallen apart with the mother of his two children, both aged under two, to the point of no return.

Perhaps the most shocking detail, and the one that seemed to anger Vanessa the most, was that he revealed he had started dating someone new.

You've decided to call time on this relationship even though you're married and she's the mother of your two children.

However, he soon heard some home truths from Vanessa, who blasted: "I don't know about being forced to see someone else, you've decided to call time on this relationship even though you're married and she's the mother of your two children."

Got a love dilemma? Get in touch with @VanessaOnAir and she'll try to help!

Clearly seething, she continued: "This is all in your court, you're making all these decisions. If you're asking how to end it, well you're doing well to destroy it, aren't you? In seeing somebody else and deciding you're not in love with your wife anymore.

"So I suppose what you do is you come clean, you're honest and the most important thing of all is you're as kind as you can possibly be."

She added: "It doesn't sound to me as if any of this is her fault. If your feelings have changed, you take responsibility. Be the best father you can and the best want to be ex-husband you can. Don't lie anymore, don't cheat on her, and be honest and be kind."

#ThisMorning you go Vanessa! Pete what a dog! 2 young children under the age of 2! How dare you! Your not getting the attention you used to get when it was just you 2 now there’s 4! Your wife deserves better!!

Yes Vanessa you tell "Pete" what an utter beep #ThisMorning

Well done vanessa , 'Pete's needed that on the phone in . ! @thismorning

Viewers agreed with Vanessa, with one saying: "#ThisMorning You go Vanessa! Pete, what a dog! Two young children under the age of two! How dare you? You're not getting the attention you used to get when it was just you two, now there's four! Your wife deserves better!!"

Another said: "Yes Vanessa, you tell Pete! What an utter beep."

"How about you discuss it with your other half, instead of ringing up Vanessa?" asked a third.

Vanessa recently opened up about how she felt abandoned by her friends following the breakdown of her marriage. 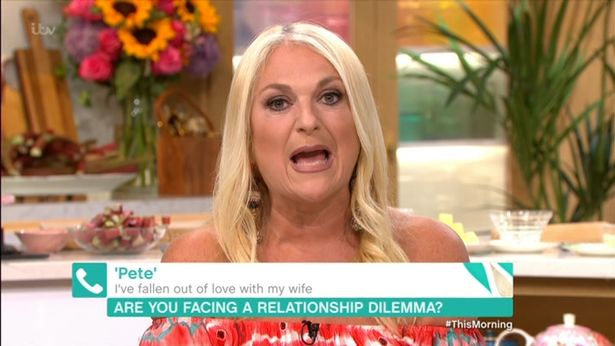 Pete got no sympathy from Vanessa (Credit: ITV)

Vanessa was divorced from Michael Kurer after he left her for another woman in 1999.

She had been married to the surgeon - father to their daughters Saskia and Allegra - for 16 years when their marriage fell apart.

Do you think Vanessa was harsh but fair? Leave us a comment on our Facebook page @EntertainmentDailyFix and let us know what you think!