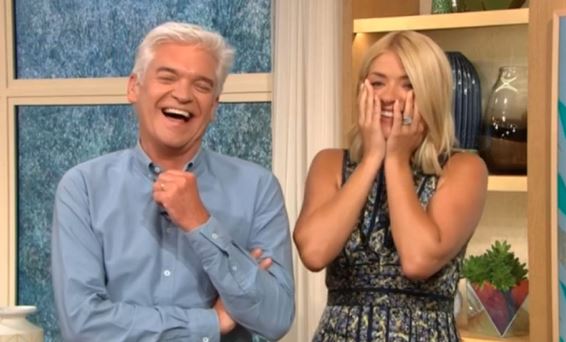 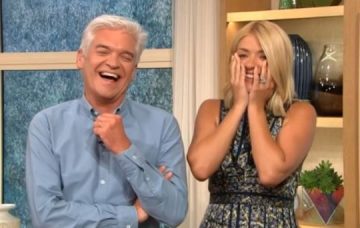 It’s hard to remember a time before This Morning burst onto our screens, in 1988.

So, to mark its 30th anniversary, we’ve gone back through the archives and brought you This Morning’s 30 Best Bits.

The moment that made This Morning an innuendo hub for ever. Blame Fern Britton.

There one day, gone the next. A tell-all book by Ulrika Jonsson and This Morning host John Leslie was abruptly taken off air, despite denying the allegations.

Resident doctor Chris Steele has performed many health checks of a highly personal nature on the show.

So by the time it came to a breast examination in 2015, there was no attempt to mask anyone’s modesty.

The floating weather map on Liverpool’s Albert Dock, the series’ first home, was always going to be a target for pranksters. So it proved, with a naked streaker.

Only This Morning could have a regular feature with a woman who predicts the future by tossing asparagus tips in the air.

Not one to be outdone by fortune-telling fruit and veg, Holly Willoughby introduced her psychic bananas to the show.

And they proved weirdly prophetic. The Duchess of Cambridge, for example, would give birth in 2018 to a boy, as Holly foretold.

The show had such an impact on pop star George Michael that he pledged £50,000 to charter two plane-loads of kids to Lapland for Christmas.

He’d wanted to remain anonymous, but hosts Richard and Judy wouldn’t hear of it and got him on the show on the phone the next day.

It might be the most “This Morning” caption and interview ever. And really, no explanation can do this one justice.

Alexander Armstrong was the willing guinea pig for Dr Chris on one of the show’s many live testicular cancer checks.

This Morning introduced the nation to dog yoga.

It was all going so well, right up until the point a shih tzu cross named “Benji the humper” broke rank from his owner and got jiggy with Maltese terrier Robbie.

As Phillip Schofield said: “I’m not entirely sure what that position was but I know what it was becoming.”

The very last performance on TV by the Spice Girls as a five-piece was on This Morning.

Do whatever you will with that information.

Yes, this is Phillip Schofield tucking into dog food, while interviewing a man whose job it is to do that very thing, testing different varieties for quality control.

Co-host Christine Bleakley’s face speaks for all of us here.

Fresh from her explosive stint in the Celebrity Big Brother house, the How Clean Is Your House star took her place on the usually sedate This Morning sofa.

Within minutes, though, she was warning Phil and Holly: “Don’t mess with me.”

Even now, no one is quite sure why, or what the hosts had done to upset her.

The producers probably thought it was a good idea to book Adele and Matt Allen, who believe in a no-rules structure for their kids.

Right up until their youngest child urinated on the carpet, that is.

The former Apprentice contestant found a niche on This Morning as she carved out a career courting controversy.

It backfired somewhat when she declared that children named after places were common as muck, only for Phillip and Holly to point out she has a child named India.

Three couples were sent off to road-test viagra, with Judy Finnigan announcing: “The pills have gone down and now we will see what comes up.”

We’ll leave the rest to your imagination.

Mr Blobby’s former sidekick was widely criticised for claiming negative thoughts can cause cancer, in a controversial interview.

Just minutes before Zippy, George and the rest of the Rainbow gang went on air, the Chippendales sent pulses racing across the land with an X-rated performance that flouted daytime TV rules.

Once voted the most cringe-worthy TV moment ever, Richard Madeley went full-on Ali G opposite “me Judy”, to her obvious horror.

So we’ll not dwell on that any further.

The comedian had Ruth Langsford doubled over in hysterics after calling his mutt’s private parts a “dog’s lipstick”.

Eamonn Holmes was left baffled. We presume she’s since explained it to him.

Before he joined EastEnders, Richard Blackwood took one for the team by undergoing a check for prostate cancer, live on the show, from Dr Chris to raise awareness.

Phillip Schofield was reprimanded after he ambushed David Cameron by passing the then Prime Minister a list of accused paedophiles.

The now infamous segment saw the pop star worrying viewers and hosts alike with her slurred speech, a fact she attributed to medication for bipolar.

Yana Rodianova was left with a gashed head when then-partner Jayde Hanson misdirected a knife during their circus act.

The Vera actress’s dog Jack got a little bit too amorous with his owner during a hilarious interview, made even funnier by the fact she didn’t know they were still on air.

Gino D’Acampo vowed to cook naked if This Morning won a National TV Award in 2011.

He was good to his word…

2 — Attack of the giggles

There are simply too many moments of Phil and Holly getting the giggles.

They’re all brilliant. Here is just one.

The morning after the night before, in 2016, when This Morning won another NTA, is legendary.

Wearing the same outfits as the previous evening, the hosts staggered in to the studio and somehow got through presenting all two hours.

That in itself is worth an award.

What’s your favourite This Morning moment? Leave us a comment on our Facebook page @EntertainmentDailyFix and let us know what you think!