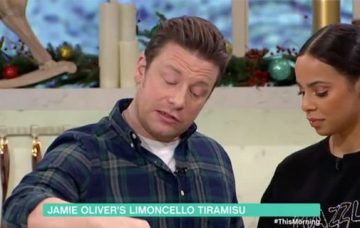 Not so healthy, after all, eh?

Jamie Oliver has been very vocal about his campaigns to improve the nation’s eating habits.

In fact, the 43-year-old chef has been behind some of the most famous initiatives towards healthy food in recent years – including his 2005 Feed Me Better which aimed to educate schoolchildren about ‘good’ foods.

But we fear he may have annoyed a few people with his earnest campaigns and “war on sugar” as This Morning viewers were quick to call him out as a “hypocrite” today (Friday 14 December).

Appearing on the show, the Essex-born star cooked up a festive menu for hosts Rochelle Humes and Phillip Schofield including a limoncello tiramisu.

And fans were quick to call him out for preparing a dessert.

Read more: Holly Willoughby will return to This Morning in 2019

Especially one laden with honey, biscuits and booze.

And viewers were further irritated when he mentioned his favourite breakfast was a “bacon sarnie”.

One blasted: “@jamieoliver eating a bacon sandwich on live #thismorning while having the stones to get the nation to eat healthier, yeah O.K. Jamie. #Hypocrite.”

@jamieoliver eating a bacon sandwich on live #thismorning while having the stones to get the nation to eat healthier, yeah O.K. Jamie. #Hypocrite

@thismorning Ah, Jamie Oliver. The man who took it upon himself to ruin all our food and drinks on the supermarkets.. pic.twitter.com/K8XErxLHDK

Another piled in, saying: “I hate Jamie Oliver me, bans turkey twizzlers and brings a sugar tax in but look at all this unhealthy [bleep] he’s making on #thismorning.”

A third said: “Jamie Oliver: ‘We should ban ready meals and sugary food to save the health of the nation’s children.’ Also Jamie Oliver: ‘The best gravy? Why, it’s chicken grease and flour.’ I’ll stick to the turkey twizzlers, ta. #thismorning.”

“Jamie bans everything or wants to ban everything!” added another. “But eats a bacon sandwich covered with butter  #ThisMorning.”

While Jamie did try to make his dessert healthier by using honey instead of sugar and natural yoghurt instead of cream, this did little to appease the furious masses.

Radio 2 fans also pulled him up on his appearance this morning, when he recommended goose fat for the roast potatoes…

Do you think Jamie Oliver is a hypocrite? Leave us a comment on our Facebook page @EntertainmentDailyFix and let us know what you think!