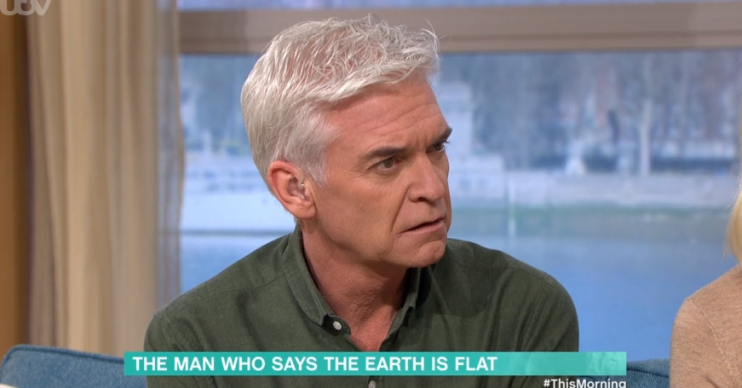 The presenter was not in tolerant mood on This Morning

TV’s Phillip Schofield tore into This Morning guest Mark Sargent when he tried to tell viewers that the Earth is flat.

Phil, 57, showed he had absolutely no time for the conspiracy theorist, as Holly Willoughby looked on, baffled.

Mark features in Netflix documentary, Behind the Curve. He admitted he flies around the world to make people aware of his theory, but said he “flies straight”.

And Phillip Schofield wasn’t having any of it.

“Obviously there are thousands of questions that I’m sure you’ve been asked a thousand times… We can see that it’s actually round. So how come it’s not?” He said.

“I’ve been lucky enough to have flown on Concord and saw the curvature of the Earth. Are you saying that wasn’t real?”

But Mark said: “I’m not saying you’re lying I’m saying you want to see the curve.”

Phil said: “I am a bit of a space nut and I have in the past looked at (NASA) pictures live on an app on my phone. So what am I looking at?”

We can see that it’s actually round. So how come it’s not?

And Mark said: “You’re looking at CGI, something that started in the 1950s.”

He believes the idea that the Earth is flat is a deliberate lie put about by governments trying to conceal the truth.

Mark even argued that astronaut Tim Peake, who has also been a guest on This Morning, was working for the government.

Viewers praised Phillip and Holly for their no-nonsense approach. One wrote on Twitter: “Credit to @schofe and @hollywills for holding this flat earth man to account @thismorning.

A second wrote: “I feel so normal and grounded (pun intended) after the flat earth interview. Wowsers.”

But another said: “Still giving the flat earth idiot airtime? Why?”

I feel so normal and grounded (pun intended) after the flat earth interview. Wowsers.

#ThisMorning how Holly and Phil are keeping a straight face with the “flat earth” guy, I’ll never know! Haha 😂😂 @thismorning

How was @hollywills not in peals of laughter? And @Schofe was hilarious.

@Schofe brilliant interview with the flat earth guy… I lost what the hell he was talking about half way. But you kept with it and asked some great questions! 😄 #ThisMorning

Was Phil right to give the guest a hard time, or should he have gone easier on Mark? Go to our Facebook page @EntertainmentDailyfix and leave your comments.