Viewers of This Morning have been left divided by a guest's extreme Christmas house decorations.

Michael Farnes, the owner of Britain’s most decorated house, appeared on Friday's show to discuss whether festive light displays are "tacky".

Michael decorates his house and front garden every year with £10,000 worth of Christmas lights and ornaments. 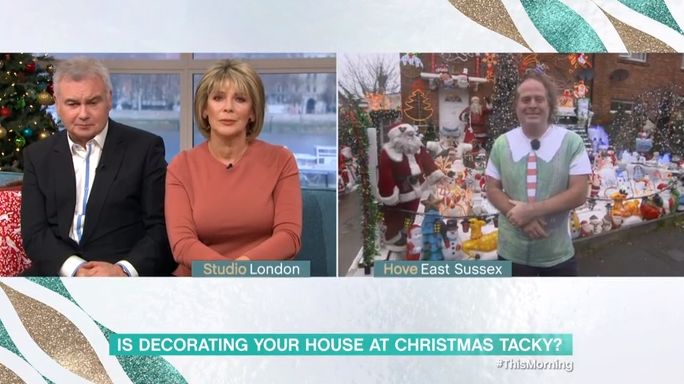 Michael decorates his house and front garden every year with £10,000 worth of Christmas lights and ornaments (Credit: ITV)

Michael defended his extravagant Christmas display, saying he starts putting up the decorations during "the second week of October".

He said: "We've got a lovely Nativity set. Santas, snowmen, reindeers. We have got a sleigh where the children can sit, the children absolutely love this. It's all for the children."

Speaking about his neighbours' reaction to the display, Michael said: "I compromise with my neighbours. The lights go off at 9 o'clock and they're all happy.

"They all come out and enjoy it. It's Christmas, who isn't happy at Christmas?"

He continued: "My wife loves it and I started about 20 years ago... it was a bit smaller 20 years ago but because we get so much joy from the children we tend to put more out each year." 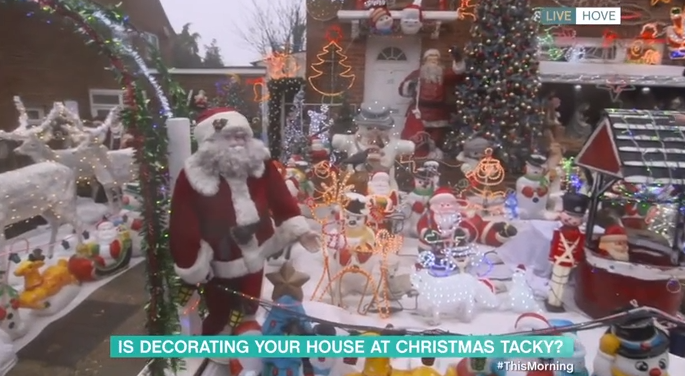 Former royal butler Grant Harrold joined hosts Eamonn Holmes and Ruth Langsford in the studio and admitted he thinks Christmas light displays are nothing but "eyesores".

He said: "Isn't that interesting... I think the international space station would have a fantastic view of that. I love that word tacky.

No, that goes beyond tacky. I feel sorry for his neighbours.

"Christmas is a time to be putting up Christmas trees but you don't have to go too over the top. I've got a Christmas tree [in my house] and I've got some garland. It's all quite simple and straightforward.

"For children, of course, it's fantastic but in reality you want to keep it something simple and dignified."

Viewers were divided over the debate, with some people branding Michael's decorations "tacky". 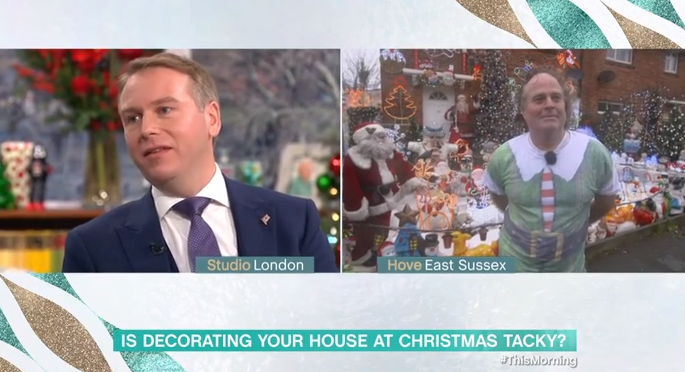 One person said: "I’m lost for words, it does look tacky."

Another wrote: "Come on now that is tacky and beyond!"

A third added: "No, that goes beyond tacky. I feel sorry for his neighbours."

I’m lost for words, it does look tacky

Come on now that is tacky and beyond! 😂 #ThisMorning

#ThisMorning No, that goes beyond tacky. I feel sorry for his neighbours

Read more: Holly Willoughby hits back at claims Caitlyn Jenner has been given ‘special treatment’ in I'm A Celeb jungle

Others thought the decorations were festive.

It’s wonderful & I would find it very difficult to just walk on past as I would want to stop & stare all day long! The children must love it so hats off to him 🥰

I think it would be great for kids and people who love Christmas to go see. I don’t think there’s anything wrong with it 🎄✨.

I'd gladly live next to it. They appreciate the holiday and it shows.