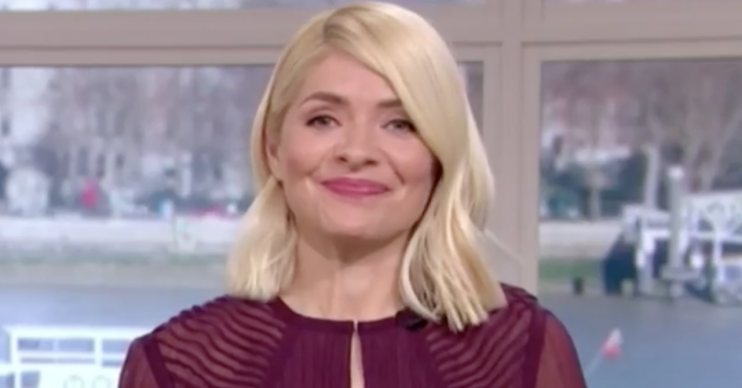 Segment was not unlike a reality TV show eviction!

TV’s Holly Willoughby became a little emotional today (January 20) as she presented a segment on the Duke and Duchess of Sussex‘s royal departure.

As Holly and her This Morning co-host Phillip Schofield introduced a montage of Harry and Meghan’s “best bits”, Holly appeared to well up.

Choking back tears, Holly sniffed and declared: “I can’t bear it.”

The clip featured images of Harry and Meghan’s wedding and the couple introducing son Archie to the world.

It also included Harry’s speech at the Sentebale event in London, where he admitted he had “no other option” but to step down as a senior member of the royal family.

She said: “When I watched him speaking it actually made me feel quite emotional. I felt it.”

Read more: Former Strictly champ Kevin Clifton hints his days on the show could be numbered

When I watched him speaking it actually made me feel quite emotional. I felt it.

However, viewers were left a little perplexed at Holly’s emotional reaction to the clips.

Another said: “Why the hell was Holly crying? Can’t believe people are upset and even offended by their decisions. I am happy for them and really hope it all works out.”

Others, however, said This Morning had likened Harry and Meghan’s departure from the royal family to an eviction from a reality TV show by airing their best bits.

Why did #ThisMorning need to show a best bits montage of Harry and Meghan? They weren’t evicted from a reality show, you know!

Others admitted they were crying too, but their tears were tears of laughter.

Viewers were last week left scratching their heads when Holly came to work dressed in what looked like school uniform.

Did you find the best bits moving? Tell us on our Facebook page @EntertainmentDailyFix.