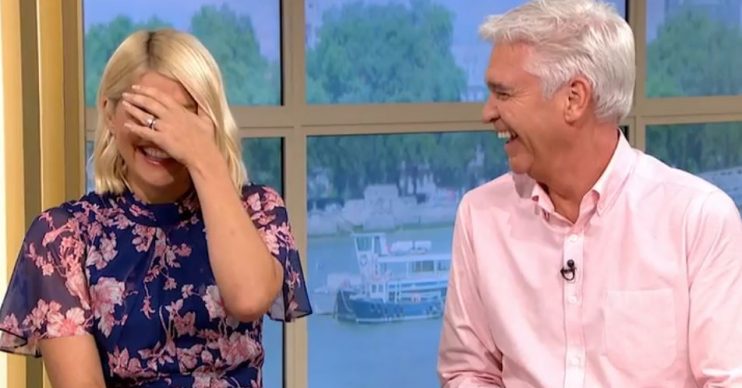 Phillip Schofield had his This Morning co-host Holly Willoughby in stitches with a rude joke after she slipped up.

On today’s (July 1) episode, Holly was introducing the upcoming segments when her tongue got in a twist.

She told viewers: “We’ve got all the Love Island gossip, including an exclusive chat with dumped islander Tom, who I’ve met before!”

Holly then stumbled over her words as she said, referring to her shock at seeing him on the hit ITV2 reality show: “My draw… jaw nearly dropped.”

Holly, who at that point could hardly speak and covered her face, managed to reply: “Just my jaw…”

But Phil ploughed on, a huge grin on his face as he looked at Holly and said: “That’s a shock and a half. Look at that, she’s shocked. Her knickers are down again!”

Later on the programme, Tom was on to chat about his short and somewhat turbulent experience on this year’s series of Love Island.

It was revealed that Holly first met the 29-year-old model years ago, when she was co-hosting Saturday morning entertainment show Ministry of Mayhem alongside Stephen Mulhern.

Tom’s dad was the director of the programme, which later became Holly & Stephen’s Saturday Showdown.

Holly, 38, said on This Morning: “You were about 12 years old and I was doing Saturday morning Ministry of Mayhem and your dad was our director at the time. I remember your dad and him bringing the boys in.”

Tom said: “We’d come in every week and watch you do your thing. It was really good.”

Holly replied: “You’ll have to find the picture and put it out on social media. It’s lovely to see you again.”