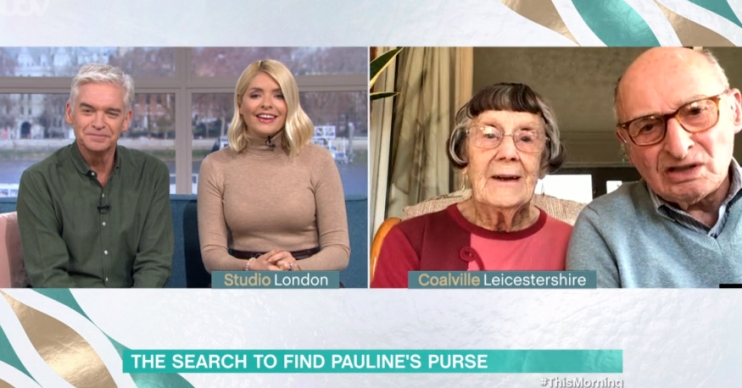 TV duo Philip Schofield and Holly Willoughby have surprised a couple with £1000 on This Morning after learning Pauline Walker had her purse stolen.

Pauline and her husband Geoffrey from Leicestershire are internet sensations after their plea for help went viral.

A couple of days ago, the couple took to their Instagram account to share a tearful video explaining how Pauline had her purse stolen while out shopping.

The caption read: “Someone has stolen Pauline’s purse from her bag while shopping in Coalville today.

“The bank has guaranteed return of all unauthorised transactions with her touch card so that’s okay.”

Before adding: “If you find her purse please call one of the family phone numbers in there, luckily she didn’t have a large amount of cash.”

The post was live three days ago and has since racked up over 4000 comments and a lot of attention.

Someone has stolen Pauline‘s purse from her bag while shopping in Coalville today. The bank has guaranteed return of all uauthorised transactions with her touch card so that’s okay. If you find her her disagree purse pleas one of our family telephone numbers inside luckily she did not have a large amount of cash inside.❤️❤️❤️ #ilovethatgirl

The cute couple appeared on the popular daytime show to give an update on the stolen purse.

“There’s a lot of people looking for it but I don’t think they’ll find it,” Pauline told Phil and Holly.

Sitting next to her, her husband Geoffrey added: “We have moved on from it. We try not to dwell on negative things too much, we like to present a happy face.”

Wielding their popular presenters power, Holly and Phil invited their guests to play the new game Spin to Win.

We try not to dwell on the negative things too much.

“We only do this for very special occasions,” explained Phil.

The rule of the game is, you win the prize the arrow spins on, with Phil adding: “Hopefully that will up any new purse.”

Geoffrey and Pauline looked a little baffled, completely surprised as to the turn their slot on the show had taken.

Thank you for the hundreds of goodwill messages for Pauline. We have tried to read, or at least acknowledge most of the messages but unfortunately some will have escaped our attention. Thank you all so much for your kindness towards us. #ilovethatgirl

Read more: Phil and Holly in hysterics as caller wins holiday to her home town

When asked if they wanted a hard or soft spin, they sat in silence… before Phil suggested, “We’ll go with a hard spin.”

The arrow stopped on £1000, and when the presenters announced it, Pauling simply whispered in shock: “£1000.”

The two continued to sit in stunned silence, as Phil declared: “I think they’re a bit stunned…”

The call to Pauline and Geoffrey came to an end, with Holly saying: “I know, how sweet!”