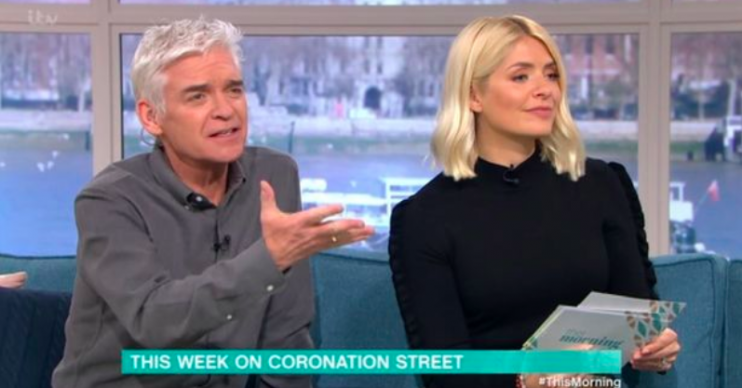 This Morning’s Holly Willoughby and Phillip Schofield have pointed out what they believe to be an “obvious” flaw in Coronation Street‘s Jade Rowan storyline.

Viewers know that John Stape’s delusional daughter Jade is currently making life hell for Fiz and Tyrone on the cobbles.

On Monday (January 20), Fiz and Tyrone found out just how far the deranged nanny had gone to make them look like unfit parents – by faking bruises and giving half-sister Hope a secret phone to be able to communicate with her.

Well Hope’s definitely up there. That’s the first place you’d look, isn’t it?

Unbeknownst to them, Hope is planning to run off with Jade and is set to go missing tonight (January 22).

Discussing the storyline with their soap expert Sharon Marshall, This Morning‘s Phillip and Holly watched a preview clip in which the police search Jade’s house for missing Hope.

Jade is seen telling the officers: “I know it looks bad, but I’m her sister. Her mother doesn’t take care of her like I do. She resents Hope. Treats her badly.”

As the police look around her flat, Jade is seen looking up at the loft door nervously – which made Holly and Phil react with incredulity.

Holly admitted she thought it was “obvious” that Hope is hidden in the loft.

Holly said to her co-host and Sharon: “Well Hope’s definitely up there. She just looked up there. That’s the first place you’d look, isn’t it?”

Phillip added: “It’s not even as if it’s been painted the same colour. It’s a different colour to the ceiling. It’s obvious.”

Holly admitted she thought the loft door was “saying open me” and couldn’t understand why the Weatherfield police do NOT investigate the attic.

Meanwhile, Sharon joked: “What’s she got up there? It could be John Stape. She’s crackers that one.”

The trio then discussed Fiz’s reaction to Hope being missing – when she finds Jade in their flat on her own, she launches an attack on her.

A furious and upset Fiz hits Jade over the head with a chopping board and is ultimately arrested for assault.