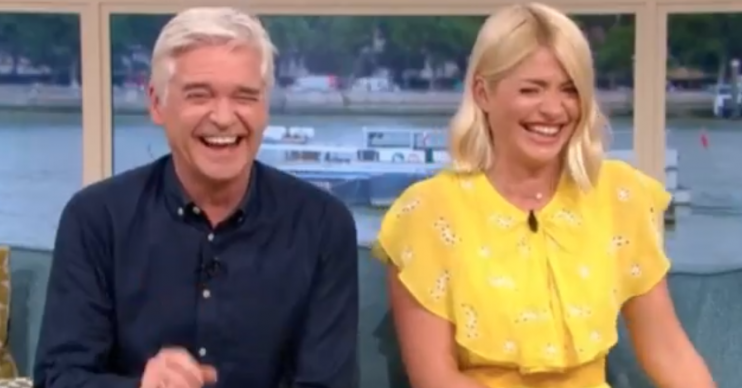 She struggled to read her script

It’s well known that This Morning co-hosts Holly Willoughby and Phillip Schofield are prone to fits of giggles.

But on today’s (June 6) episode, Holly found herself laughing so much she was unable to read from the script, after Phil came perilously close to a rather rude blunder.

The pair were introducing some of the guests and topics to be discussed on the programme and at first, all appeared to be going fine.

Phil said: “Still to come this morning, she’s taking a break from tending her flock…”

At that point, he faltered but quickly pressed on: “…to cook us a summer treat. We’ll be in the kitchen with Yorkshire shepherdess Alison O’Neill.”

As he finished speaking his voice started to break and Holly, taking her cue, told viewers that actress Hayley Hasselhoff was in the studio to offer her take on this year’s summer style and the latest occasion wear.

“Sorry,” she said, explaining: “It was ‘flock’ and ‘cook’ close together…”

At that point they both erupted into hysterics and Phil said: “That’s about as dangerous as it’s got recently.”

Holly then appeared to have swapped her dress for another in a subsequent interview, although she hadn’t changed it as it was pre-recorded.

Nevertheless, hysterical viewers on Twitter worried she might have accidentally wet or soiled herself because she was laughing so much.

Read more: Max George hits back at claims he exchanged messages with Meghan before she met Prince Harry

One wrote: “Holly’s [bleeped] herself from laughing so much so she had to get changed #thismorning.”

Someone else asked: “Did Holly [bleep] herself? Why the change of clothes? #thismorning.”

A third clarified scathingly: “Can’t believe that folk are so dense that they think Holly changed her clothes when it was actually a pre-recorded interview.”

Another viewer, who didn’t appear to be a fan of Holly’s giggly antics, tweeted: “She can Flock off #ThisMorning.”