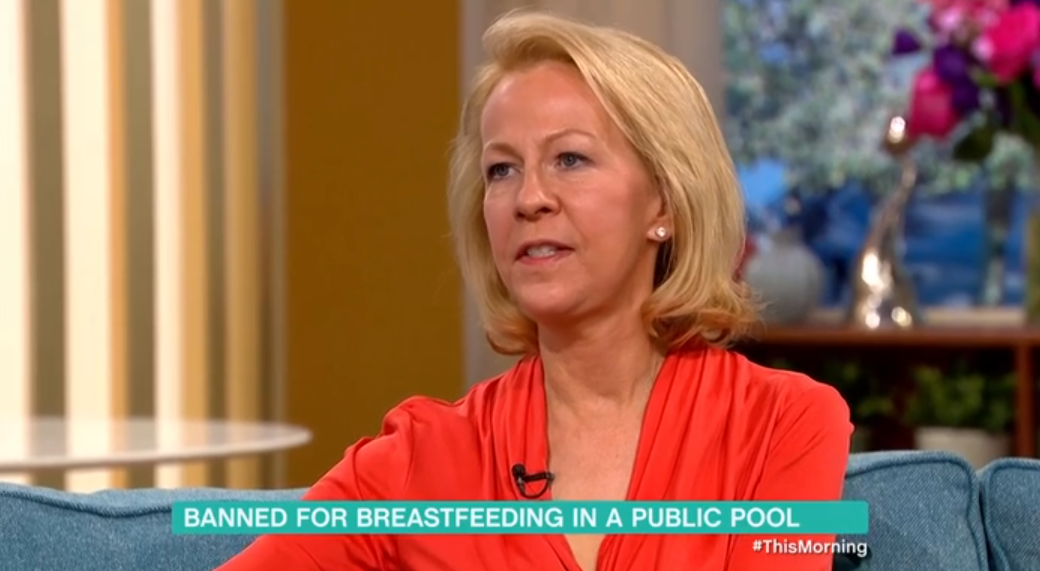 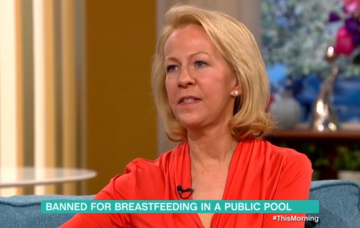 The show held a debate on public breastfeeding

This Morning viewers were left gobsmacked after a guest suggested breastfeeding in a swimming pool is comparable to urinating in public.

On Wednesday, the show held a debate on breastfeeding in public after two women claimed they were asked to leave their local pool in Stoke-on-Trent for breastfeeding their babies, as it “breached the food and drink policy”.

Mums Natalie Forester and Chloe Hattersley appeared on the show via video link and say’d been shocked and embarrassed.

She told This Morning hosts Eamonn Holmes and Ruth Langsford: “It’s on a level with urinating in the street. You have a path that leads to increasingly anti-social behaviour and I’d say it’s on that path.

“If I’m sitting in a cafe or a swimming pool, I don’t want people to start engaging in bodily functions that have usually been kept private.”

But Ruth hit back: “But it’s a very natural bodily function to feed your child, if not the most natural.”

Virginia replied: “There are many bodily functions that are natural but we don’t do them in front of other people.”

Eamonn then pointed out that the Equality Act of 2010 states a business cannot discriminate against mothers who are breastfeeding a child at any age.

Virginia hit back: “It’s not about what legal or illegal, it’s about consideration for other people.

“If you are in a public place, it’s not something you necessarily want to see. I don’t like breastfeeding in public at all.”

However, Chloe said: “Breastfeeding is the most normal and natural thing anyone can do. It’s not something to be ashamed to do and should hide away for.”

But after Natalie and Chloe revealed they would breastfeed in any circumstance, including a funeral, Virginia said: “You’re kidding. I think that’s grossly disrespectful for people that are sitting in a congregation to mourn someone.

“I think that’s just a horrible way to behave.”

“We have many areas at our poolside where breastfeeding can take place and actively support this, we are reviewing out existing policy and have invited Natalie and Chloe to be part of that review.”

Viewers rushed to Twitter to share their thoughts on the debate with many expressing their outrage over Virginia’s comments.

One person said: “So apparently breastfeeding in public is as bad as urinating in the street…. What is wrong with this woman??”

Read more: Woman who had gender change surgery at 81 says it gave her “new lease of life”

Some people agreed with Virginia’s opinion that breastfeeding in a swimming pool wasn’t a good decision.

What is your opinion on breastfeeding in public? Leave us a comment on our Facebook page @EntertainmentDailyFix and let us know what you think!