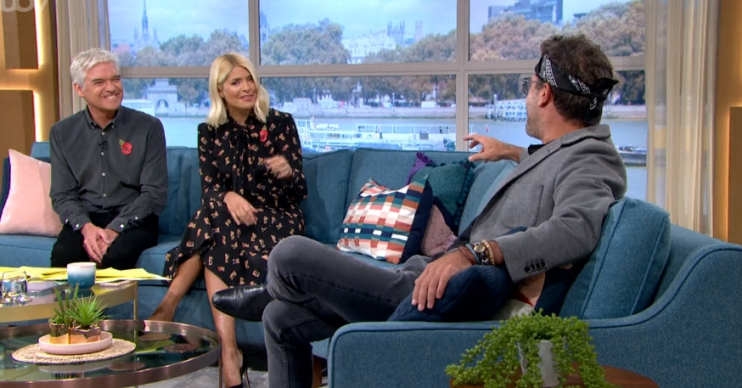 Phil joked Gino was having a "midlife crisis"

Viewers of This Morning were baffled by Gino D’Acampo’s new look – with some asking whether he’s having a “midlife crisis”.

The chef appeared on Tuesday’s show and host Phillip Schofield was quick to bring up Gino’s wacky outfit.

Gino, 43, wore a grey blazer and trousers with a black and white bandana, round glasses and trinkets around his neck.

Read more: Phillip Schofield scolds Gino D’Acampo as he interrupts his cooking segment on This Morning

Phil said: “Look at you! What’s the bandana and the glasses…”

Gino explained: “I’m growing my hair. Instead of putting loads of wax [in it], I’m going to wear a bandana.”

What we’re witnessing here is a full on public midlife crisis.

Holly Willoughby told him: “You’ve got the beads and everything. You look like someone who’s been travelling on a gap year and you’ve come back with all the stuff.”

Gino said: “That’s what has happened. I’ve been travelling, I went to America filming and then I thought, ‘you know what? From now on, I want to start breeding horses.’

“I’m going to be a proper cowboy.”

Phil joked: “What we’re witnessing here is a full on public midlife crisis.”

Gino said: “Yep. You are 100 per cent right. My wife reminded me this morning.”

Holly added: “You look lovely,” to which Gino said: “Thank you. Don’t mind me, you just carry on doing your show.”

One person asked: “Is Gino having a midlife crisis? #ThisMorning,” while another wrote: “Why is Gino who is 43 acting and dressing like he’s 18? #ThisMorning.”

Is Gino having a midlife crisis? #ThisMorning

Why is Gino who is 43 acting and dressing like he’s 18? #ThisMorning

A third tweeted: “Why is Gino dressed like that? Midlife crisis? #ThisMorning.”

Why is Gino dressed like that? Midlife crisis? #ThisMorning

One said: “I love Gino he’s so bizarre,” while another wrote: “Gino would look good in anything.”

Another added: “I like it he’s just having a bit of fun good on you Gino whatever floats your Gondola,” followed by a wink face emoji.

🙌gino would look good in anything

What do you think of Gino’s look? Leave us a comment on our Facebook page @EntertainmentDailyFix and let us know.