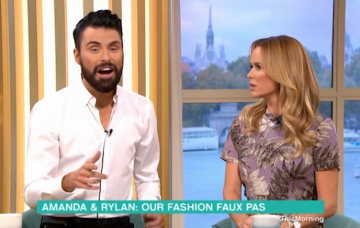 We can't even imagine the pain!

Rylan Clark Neal has revealed his nipples were once “ripped off” thanks to a certain outfit on The X Factor.

During Friday’s This Morning, the presenter – who took part in the competition in 2012 – said the first outfit he wore for the live shows caused him a particularly painful experience.

While discussing fashion faux pas with co-star Amanda Holden, Rylan, 30, recalled the moment he was wearing a gold chain vest which left his nipples bleeding.

As a photo of Rylan wearing the outfit popped up on screen, he said: “I look like a camp Egyptian.

“The thing is that was a gold chainmail vest. Everyone used to take the mick out of my singing, but what they don’t realise is I was in pain.

Amanda gasped before joking: “I think I would end my career if I lost mine.”

He continued: “It did though, and I came off stage thinking I’m really wet, I must be really sweaty with obviously adrenalin of first live show. And it was red.

“There’s a lot of children watching, I don’t want to scare them.”

Rylan and Amanda joined forces once again on Friday to host the daytime show while Holly Willoughby and Phillip Schofield are on half-term.

He posted a snap of himself backstage at Big Brother while sporting a birthday badge and clutching huge rose gold balloons of his age.

Thank you for all your lovely messages. I couldn’t think of a better place to spend my birthday @bbuk ❤️🎂 pic.twitter.com/bZRXNRKsVi

He captioned the post: “Thank you for all your lovely messages. I couldn’t think of a better place to spend my birthday.”

Speaking about his birthday celebrations on This Morning, Rylan told viewers: “I’m a bit tired. It was my birthday yesterday. Thank you to everyone at Big Brother who spoilt me and my husband Dan who surprised me by taking me out last night.

“I’ve been out on the lash. Well, I had a few drinks and had a lovely night, but I am feeling the effects this morning.”

Have you ever suffered a painful injury due to an outfit? Leave us a comment on our Facebook page @EntertainmentDailyFix and let us know what you think!