Rochelle Humes was left reaching for the tissues on today's This Morning as a guest suffering with cancer had an emotional reunion with her family.

The 30-year-old presenter, who was co-hosting the show in Holly Willoughby's absence, couldn't control her tears as April McGilligan's daughters and grandchildren came into the studio to surprise her.

And the segment left viewers at home choked up as well, with many taking to social media to express their feelings. 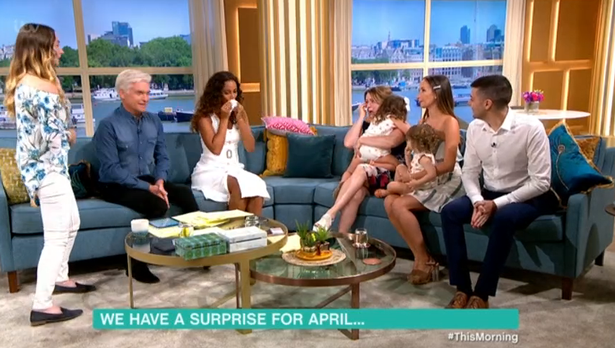 Rochelle could be seen wiping the tears away (Credit: ITV)

Poor April has had an awful time since being diagnosed with breast cancer in 2007.

Despite undergoing three rounds of chemotherapy, doctors have told her that she's only got months to live.

And as if that wasn't bad enough, her son Michael passed away suddenly last year.

How has This Morning got me crying like this before work?

April found the 24-year-old lifeless in his bedroom after she returned from her youngest daughter's 21st birthday party.

Incredibly, she's put her own worries to one side in order to set up a JustGiving page to raise money for a gravestone for Michael.

But today, it was April's turn to have something nice done for her, as she was invited onto This Morning with Rochelle and Phillip Schofield. 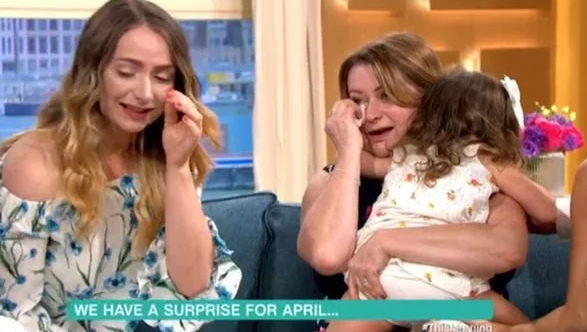 April shared a tear with her youngest daughter (Credit: ITV)

One of April's daughters lives in Texas with her children, which means that April rarely gets to spend time with them.

She revealed that the last time she'd seen them in the flesh was seven months previously, and that they had to rely on FaceTime to speak with each other. 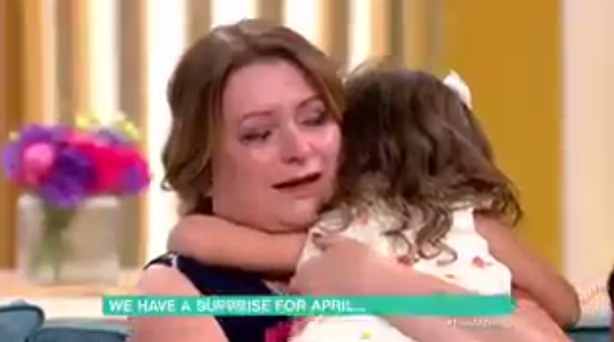 She looked so happy to be holding her granddaughter (Credit: ITV)

At that point, the daughter appeared at the studio door with her partner and two children, causing April to cover her mouth in shock. And her youngest daughter showed up, too.

"I can't believe you've done this," April gasped. "Are these not the most beautiful children in the world?"

Rochelle Humes wasn't the only one fighting back the tears. Viewers at home found themselves turning on the waterworks, too.

One tweeted: "Awww @ThisMorning I'm sobbing. That was a lovely surprise for her. I hope she gets the money to get her son's headstone. What a precious family."

Another said: "How has This Morning got me crying like this before work?"

And a third wrote: "Oh #ThisMorning got me in tears. How lovely was that."