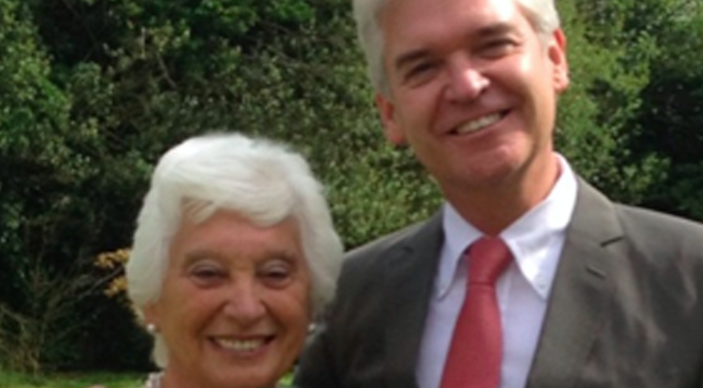 Phillip Schofield has revealed the difficult moment he told his beloved mother that he’s gay, as revealed on This Morning. The TV presenter, 57, gave an emotional interview on the magazine show today (February 7) and looked tearful as he ‘came out’ to co-presenter Holly Willoughby. Read more: Loose Women stars pay tribute to Phillip Schofield […]

Phillip Schofield has revealed the difficult moment he told his beloved mother that he’s gay, as revealed on This Morning.

The TV presenter, 57, gave an emotional interview on the magazine show today (February 7) and looked tearful as he ‘came out’ to co-presenter Holly Willoughby.

During a planned interview, Phillip admitted he’d been thinking about coming out for a long time and revealed his mum’s heartbreakingly unbothered reaction to the news.

Phillip told viewers that he’d confessed to his wife of 27 years Stephanie Lowe and two daughters, and they “jumped up and gave me a big long hug”.

He went on to say: “It was the same with my mum. My mum is watching this today. She’s been on the phone this morning, saying ‘hope you’re okay’.”

Phillip’s mum, 83, was one of the first to know, alongside his wife and kids.

Phillip broke the news that he was gay on social media, with a long statement which read: “You never know what’s going on in someone’s seemingly perfect life, what issues they are struggling with, or the state of their wellbeing – and so you won’t know what has been consuming me for the last few years.”

He added: “With the strength and support of my wife and daughters, I have been coming to terms with the fact that I am gay.

“I have been married to Steph for nearly 27 years, and we have two beautiful grown-up daughters, Molly (27) and Ruby (24).

“My family have held me so close: they have tried to cheer me up, to smother me with kindness and love, despite their own confusion.”

He went on to say that he’d battled “some very dark moments” as he faced “the hurt that I am causing my family”.

He said his wife has been “incredible”, and also thanked co-star Holly and the team at ITV for their support.

Phillip ended by asking those reading to “please be kind, especially to my family”.

Following his statement on social media, Phillip joined Ruth Langsford, Eamonn Holmes and Holly in the This Morning studio.

Sitting alongside her co-host on the sofa, Holly began by saying: “I’ve never been more proud of my friend than I have today.”

Turning to Philip, she said: “Reading that, I can hear your voice, I can hear the pain and how difficult that is for you… It’s out there now, how does this moment feel?”

Phillip replied: “Wow. It’s funny because, everyone I’ve spoken to have all been so supportive […]. Every person I tell, it gets a little lighter and lighter.

“Of course I’m really very aware that Steph and the girls are at home watching this, and we’re all together and we’ve spent a lot of time together. And they’ve been supporting us to this moment as they all knew it was coming.”

Phillip revealed he and his wife have never had any secrets, and admitted the situation has been “tough” on her.

Afterwards, Ruth and Eamonn joined Phillip and Holly and they all hugged.

How do you feel about Phillip’s announcement? Leave us a comment on our Facebook page @EntertainmentDailyFix and let us know what you think!