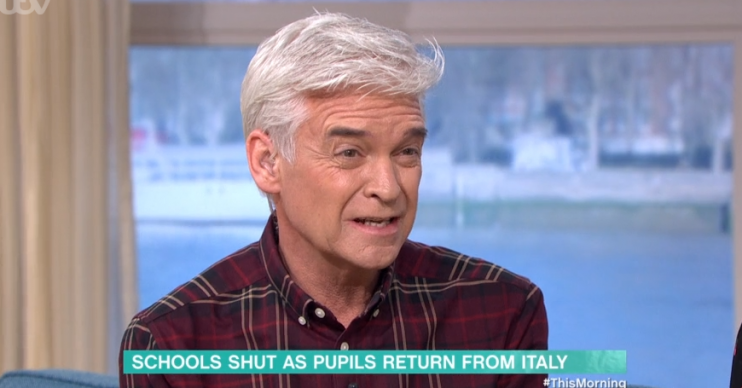 He recently visited France with his family

TV’s Phillip Schofield has revealed his fears he has the coronavirus following a recent trip to Paris.

Earlier this month, the This Morning presenter visited the French capital with his wife Stephanie and their two daughters, Molly and Ruby.

During Wednesday’s show, the presenter aired his concerns over the virus – which has already killed more than 2,770 people across the world with 81,279 cases reported worldwide – and questioned whether he should self-isolate.

During a discussion on the virus with Nick Ferrari and actress Nicola Thorp, Phil said: “Last week I was in Paris. Do I put myself in self isolation? Do we shut down this place?”

Nicola replied: “The guidelines don’t seem to be particularly clear for everybody. It does seem like we’re constantly talking about coronavirus without talking about the implications of it spreading.”

The first case of coronavirus in Europe was reported in France last month and the first and only death in the country was confirmed on February 15.

There are currently 13 cases of coronavirus in the UK.

Earlier this month, Phil jetted off to Paris with his family to enjoy a short break.

Do I put myself in self isolation? Do we shut down this place?

The presenter documented their family holiday on Instagram with pictures of the Eiffel Tower and a selfie of him and his wife.

The star and Steph wore sunglasses as they beamed into the camera in front of the Parisian landmark.

He also posted a photograph of the four of them in front of an illuminated heart, adding four further heart icons to describe his love for them.

It came after Phil revealed he was gay in a statement shared to his social media pages earlier this month.

Read more: Fears coronavirus could kill half a million Brits as Government steps up ’emergency plans’

He later appeared on This Morning alongside co-star Holly Willoughby to talk about his decision to come out.

Phil’s statement read: “You never know what is going on inside someone’s seemingly perfect life, what issues they are struggling with, or the state of their wellbeing – and so you won’t know what has been consuming me for the past few years.

On the programme, Phil added: “It’s tough. But this is not something that happened quickly, I’ve had to deal with this in my head for quite some time.

“We’ve been honest and open. Steph, I can’t write in any statement what I feel about that woman. She’s amazing, she’s incredible.”