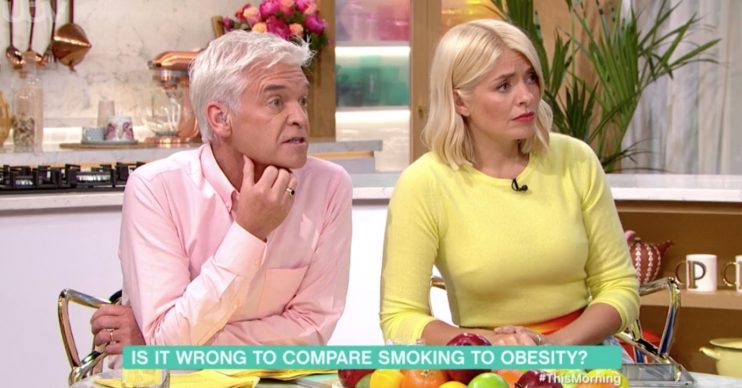 Phillip Schofield clashes with guest during This Morning obesity row

Who's right and who's wrong?

Discussing whether Cancer Research was right to compare obesity with smoking, the guest argued that it wasn’t.

Phil had other ideas.

Cancer Research UK’s latest ad shows a packet of cigarettes, however the brand name reads: “Obesity is a cause of cancer too.”

Along the bottom of the advert, it reads: “Like smoking, obesity puts millions of adults at a greater risk of cancer.”

Although hard-hitting, the campaign has been criticised by some for comparing smoking and obesity, with many claiming it’s wrong.

Phil and Holly, joined by the guest and Vanessa Feltz, discussed the advert.

But when the guest argued against the advert, Phil sprang into action.

“A lot of the time if you’re obese you’ve got your head in the sand,” he began.

“The facts are that obesity and treatments for being overweight cost the NHS £6billion a year.

“The annual spend on the treatment of obesity is more than the police, the fire service and the judicial system combined. The overall combined cost of obesity is £27billion a year.”

He went onto say when she argued that there was a danger of fat shaming: “You have got your head in the sand, you’re a denier.”

#Thismorning Obesity can contribute to cancer. Fact. Simple. You don't have to like it but it is the truth.

If it’s medically proven that obesity can increase the risk of cancer what’s the problem? It’s just one of a number of things that can. I don’t understand what the problem is for the woman who’s criticising the advert #ThisMorning

Others felt it was wrong to bring obestity into it.

Lots of people tweeting missing the point the woman was making. No one's glorifying obesity, nor was she denying the effects it can have on the body. Big ppl don't have a chance to not think about it,whenever they go out they're very aware they're a "problem" #ThisMorning

#thismorning #philipschofield you need to check your facts about obesity. I am 22 stone and it's not down to eating too much. I only eat around 900 calories a day and I exercise daily. doctors said I don't eat enough. They want me eat 1700 calories

Why is the answer always "let's have a salad?" I'm thin and don't always eat salad, I eat most things but it's portion control and everything in moderation #thismorning

@thismorning #thismorning #fatsh we speak with many people who are overweight. Fat shaming is the absolute worse thing to do. Why, when a persons self esteem is already on the floor would you then stamp on their head? #nomorebullying

Read more: Worried This Morning viewers fear for woman who wants ‘biggest boobs in the world’

While some either agreed or disagreed, one Tweeter said: “Love it when Phil goes in for a debate. Go on Phil!”