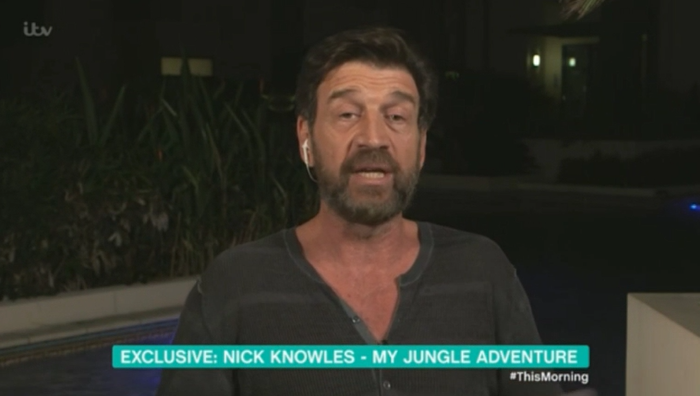 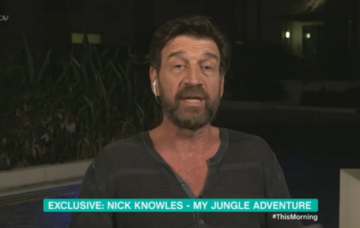 He said he didn't have anything else to wear

Nick Knowles sent social media into a frenzy when he sported a pair of tiny red speedos in the I’m A Celebrity jungle.

However, the DIY SOS presenter has now apologised to fans for wearing the skimpy pants and insisted they were all he had left to wear.

Nick, who was voted out of the jungle on Thursday night, opened up about the reaction to his pants during an appearance on This Morning on Friday.

Read more: Nick Knowles’ son Charles slams claims he is being ‘fake’ on I’m A Celebrity

As the interview came to an end, Nick said: “Can I publicly apologise for the red budgie smugglers? They were all I had left to wear.”

Host Ruth Langsford replied: “We actually quite enjoyed them Nick.”

On Tuesday night’s episode of I’m A Celebrity, Nick shocked viewers when he stripped down to his speedos.

He had offered to help campmate Emily Atack collect some water for the camp, however, it seems the Australian heat was getting too much for him.

He explained to Emily, 28, that he couldn’t take on the task fully clothed so he decided to strip down to his tiny red trunks.

Viewers watching from home didn’t know what to make of Nick’s budgie smugglers, with many admitting they found it hard to watch.

One person said: “Nick Knowles in a speedo is not a bit necessary.”

But, others were left slightly hot under the collar.

Another wrote: “I was having kinda a crappy day and now I’m watching #ImACeleb and I see Nick Knowles in his speedos and… all is good again. Thank you #ImACeleb bosses.”

Nick’s two sons TJ and Charles recently admitted they had received ‘abuse’ from their friends over their dad’s choice of pants.

Charles said on Loose Women earlier this week: “I’m taking a lot of abuse from my mates at home but if he’s got it, flaunt it, right?!”

TJ added: “We don’t know anything about those! Not seen those before!”

Meanwhile, during his chat on This Morning, Nick opened up about the amount of weight he lost in the jungle.

Speaking about how being on such small rations of food was difficult, Nick said: “To give you an idea I was in there for something like 19 days and I’ve lost 14 kilos.”

Nick also admitted he didn’t know what to expect from the show because he hadn’t watched much of it.

He said: “My family are all big fans of it and I’d caught the odd bit here and there but I didn’t really have great expectations of it.

“And I kind of thought because I’d done wildlife stuff in Africa and India and various other places I’d be able to handle living outside and doing other bits.

“But the bits that you don’t see very much in the programme are actually the things that weigh you out.

“You have to go to the bottom of a very steep hill to get the wood for the fire which you have to do about eight or ten times a day and then bringing the bags of water – you’re pulling about 30 kilos, those bags when they’re full.”

Were you sad to see Nick leave the jungle? Leave us a comment on our Facebook page @EntertainmentDailyFix and let us know what you think!