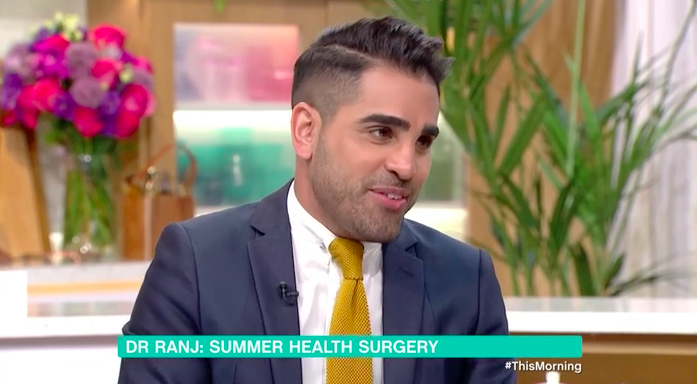 A grateful mum became tearful on This Morning, when she credited Dr Ranj Singh for saving her baby boy’s life.

Appearing today (May 2), emotional Jane thanked the TV doctor for giving her the advice she needed to save her son from choking.

Mum Jane revealed that her baby son Ezra began choking when he was eating his tea last week.

After “giving him a pat on the back”, he kept on choking and she “realised it was a bit more serious”.

Fearing the worst, she told hosts Phillip Schofield and Holly Willoughby that her first instinct was to turn him upside down.

Speaking via video link and trembling with emotion, she revealed that her son then stopped making the choking noise and went a shade of purple.

She said: “He went a really dark purple and I just thought ‘oh he’s stopped breathing’.”

Clearly struggling to remain calm, she went on: “Sorry, I get a bit emotional. Just all of a sudden it popped into my head that I’d watched a segment a couple of years ago with yourselves and Dr Ranj saying what to do when a baby choked.

“So I put him on my knee face down and did five back thrusts and, when they didn’t work, I turned him over on his front.

“The very first chest thrust that I did, it released what was choking him.”

Relieved Jane confirmed that Ezra then started coughing – a good sign! – and was fine within five minutes.

Dr Ranj told viewers that choking among small babies is “very common” and explained how to intervene if they begin to choke.

Another fan watching the show tweeted from home: “The video from Dr Ranj also saved my daughter’s life.

“I had only watched it three days before when my daughter started choking. Because of Dr Ranj, I knew what to do. Thanks This Morning!”