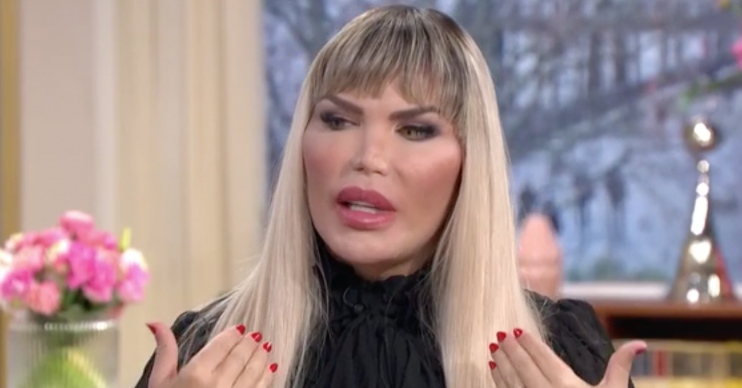 A reality show contestant once nicknamed ‘the Human Ken Doll‘ after undergoing a reported £500,000+ worth of cosmetic surgery has explained she felt like ‘a failure as a male’.

Rodrigo Alves, now known as Roddy since becoming a transgender woman, revealed on This Morning earlier today she has been living as a woman for three months and hopes to have gender reassignment surgery that will involve the removal of her breast implants and her penis.

She told hosts Phillip Schofield and Holly Willoughby her wish to be a woman could have claimed her life as she ‘self-medicated’ with hormones.

The 36-year-old said: “I should have seen a psychologist but instead I self-medicated with hormones and then I was at an event having drinks and the next thing I knew I was in hospital.”

Urging anyone suffering with gender dysphoric disorder to consult a doctor rather than follow her actions, Roddy also admitted to some regrets about experiencing so many ops.

“I tried my best to be a male but failed badly because I wasn’t happy,” she said.

I tried my best to be a male but failed badly because I wasn’t happy.

“I carried on those plastic surgeries because I actually wanted to be a woman. I have gender identity dysphoria, I have been treating it.”

Roddy, who claims she feels “at peace” with herself, also noted she felt regrets about having a ‘fake six pack’ – but has no doubts about being a woman, and plans further surgeries to have her breasts enlarged and to ensure her voice is ‘more female’.

Viewers’ reactions on social media were mixed – with some of those watching at home very unsympathetic about Roddy’s situation.

One person who misgendered her fumed on Twitter: “Why do you give these people airtime! He’s obviously an intention seeker! #Ken #Barbie @thismorning.”

And another onlooker complained, referring to the show’s new format: “If watching Ken Doll is making up our extra half hour – I’m turning off!!!”

But someone else tweeted: “I think it’s so brave for “Human Barbie/Ken Doll” @Rodrigo to come out as transgender.

“It’s sad that she has had to spend almost £650K on surgery to get the “perfect” body. Wishing her so much love for her gender reassignment surgery.”

Have a great weekend everyone !! #rodrigoalves #beauty #doll #barbie #makeup

Another tweeted Roddy saying: “Just seen you on This Morning. Best wishes on your journey to becoming a woman. I think you look amazingly beautiful as a woman but please don’t go silly with the plastic surgery.

“Looking forward you seeing you at the end of your journey.”