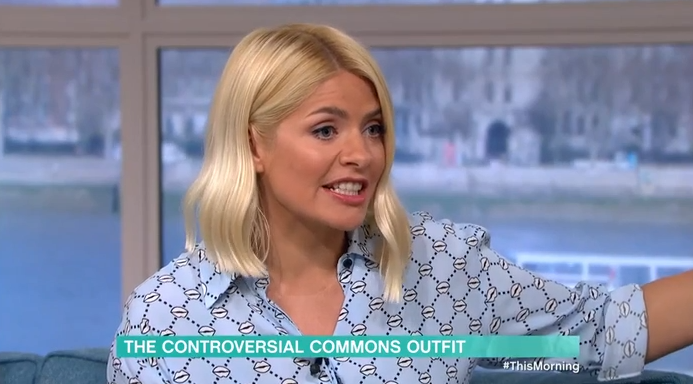 She didn't think it was "inappropriate"

The issue was debated on today’s This Morning after Tracy recently hit back at trolls on Twitter who branded her off-the-shoulder dress “inappropriate”.

However, Holly admitted she didn’t see anything wrong with the dress as she clashed with guest Nick Ferrari, who thought it wasn’t the right outfit to wear.

Nick said: “I’m here to say I think it is inappropriate, she’s in a building of great Majesty. This is where our laws are made and this is where men and women are sent to fight wars.

“I hope none of your viewers do but if they do have an appointment with a consultant later today about their health, they would expect him or her to be appropriately dressed.”

Holly cut in: “Am I the only one that doesn’t think that it’s inappropriate? I can’t understand.

“It’s not showing anything. It’s not making me think, ‘oh she’s overtly sexual.'”

Nick said: “I’ll say it again, if it’s a slip or accidental…” as Holly interrupted: “But even if it’s not.”

Nick continued: “She referenced Tom Watson, the former Deputy Leader of the Labour Party. If Tom Watson arrived in a sleeveless vest and gave a speech in the House of Commons…”

Am I the only one that doesn’t think that it’s inappropriate?

Holly hit back: “But that’s a smart dress,” to which Nick asked: “Is it necessarily a work dress?”

Holly replied: “But a vest is under garment so there’s a difference.”

Nick asked: “Would you expect a barrister acting for you in court to dress like that?”

Read more: Holly Willoughby hits back at parenting critics as she reveals how she balances work and motherhood

Holly said: “I wouldn’t mind. Honestly, I don’t see… I just see a shoulder. Why is that distracting? I find it fascinating.”

Tracy also appeared on the show via video call and defended her choice of outfit.

She said: “I’ve always prided myself on my professional approach to my role. It does feel quite extraordinary that the outrage is about a shoulder, especially now we’ve accepted that women can breastfeed in the chamber.

“There’s so much else to be outraged about.”