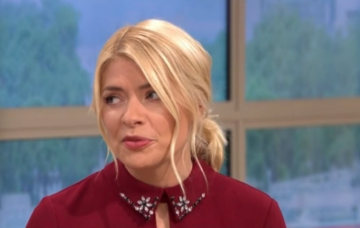 Holly Willoughby has revealed her last day on This Morning will be Thursday October 18 before she jets out to Australia to co-host I’m A Celebrity… Get Me Out Of Here!.

On Tuesday’s edition of the show, it was revealed that former Saturdays singer Rochelle Humes will be keeping Holly’s seat warm while she’s away.

Holly, 37, explained that she has until Thursday left on the show before she and co-star Phillip Schofield head on a half term break, and then she will fly out to Oz.

Phil, 57, said: “Hello and welcome to Tuesday’s This Morning and unbelievably, you [Holly] have got today, tomorrow, Thursday and then it’s half term.”

Holly continued: “Half term with the kids and then off to the jungle!”

As the I’m A Celebrity theme tune played, Holly admitted: “Oh my gosh, it’s getting real now. I had a meeting yesterday with the whole I’m A Celeb team.

“We had a bit of a read through of a fake show as if it was a show to get used to things.”

Holly revealed she’s already practised saying “I’m A Celebrity… Get Me Out Of Here!” which she and Dec Donnelly will say at the start of every show.

She added: “What I didn’t realise is that only one of them says, ‘I’m A Celebrity’ and then they both say, ‘get me out of here.’

“So you only join in halfway through depending on who’s got the line before.”

Phil replied: “Have you never noticed that?” to which Holly said: “No.”

Phil joked: “How much of a fan are you of the show? It’s pretty obvious.”

The duo then revealed that Rochelle will be standing in for Holly while she’s in Australia.

Gushing about landing the job, Rochelle – who has co-hosted the show on several occasions before – said: “I’ll take good care of him.

“I’m excited and I can tell people now. There were rumours at the weekend and I didn’t reply to any of my friends, sorry!”