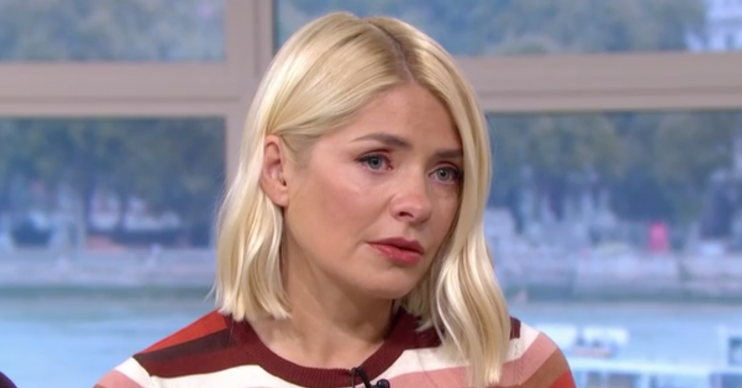 Life coach Eva Speakman opened up about a previous partner

This Morning presenter Holly Willoughby was moved to tears during today’s show as her co-star Eva Speakman revealed her domestic violence ordeal.

The life coach appeared on the This Morning sofa with her husband Nick Speakman and opened up for the first time about a past relationship with an abusive partner.

Fighting back the tears, Eva revealed how an unnamed former partner started verbally abusing her, before things quickly turned violent.

As Eva explained that a confrontation between her then-partner and her dad resulted in her partner hitting her dad, breaking his nose, Holly reached for the tissues.

Struggling to continue with the interview, Holly’s co-host Phillip Schofield took over the reins of the chat and asked Eva what advice she’d give to viewers going through a similar ordeal.

“I would say please realise that you have done absolutely nothing wrong. I’ve also got to say that they won’t change. It will only get worse,” she said.

“Thank you so much, well done, I am full of admiration for you, I really really am,” an emotional Holly said.

Well done Eva talking about her past domestic abuse. Very brave. I reached for a tissue the same time Holly did!

Viewers were also quick to praise Eva’s bravery in sharing her story.

How brave for Eva Speakman to share this, even tho it was some time ago it’s obviously still very raw. One question, why did the friends out with her not do anything about her being attacked??!! Bless Holly too….#thismorning

#ThisMorning Well done Eva talking about her past domestic abuse. Very brave. I reached for a tissue the same time Holly did!

Eva, what a brave lady. Your story is truly heartbreaking. It’s had me in absolute tears, a subject so close to my own heart! #ThisMorning #DomesticViolenceAwarenessMonth #DomesticAbuse

Eva, such a brave and empowering thing to do, telling your story for others to hear on #ThisMorning, and hopefully helping to inspire and motivate others to get out of these situations. Really moving. ♥️