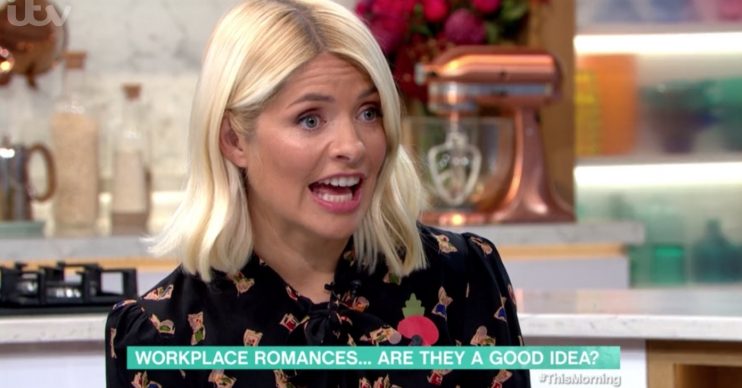 They both met their partners at work

Holly Willoughby has admitted she’s ‘guilty’ of having a workplace romance as she defended her marriage to Dan Baldwin.

And not to feel left out, co-host Phillip Schofield also admitted to a workplace romance on today’s episode of This Morning (5.11.19).

Holly, 38, and Phil, 57, were having a discussion about relationships at work in the wake of revelations that McDonald’s boss Steve Easterbrook was fired after having a relationship with an employee.

Resident psychologist, Emma Kenny, said: “If you’re in a situation and you’re in the office you’re having an affair with somebody, if you’ve got issues…

“Also, do you think someone is taking advantage having an affair with the boss, promoting themselves at work?

“If you have a family member struggling with an office romance, please get in touch.”

“We should both call in!” Holly responded.

“I met Steph at work,” Phillip then said. “A lot of people meet their partner at work.”

Holly met Dan when they were both working on the ITV kids show Ministry Of Mayhem.

They tied the knot in 2007 and now have three children – Harry, 10, Belle, eight and Chester, five – together.

“It’s quite a normal way to meet someone,” Holly said. “It doesn’t always have to be some sort of illicit affair.”

“It can be quite a lovely, nice thing.”