Holly Willoughby struggled to contain her laughter as a This Morning guest described how her female dogs have sex.

The presenter and her co-star Phillip Schofield spoke to pet owner Christine King with her lesbian pugs, Pugly and Nelly, alongside vet Dr Scott Miller.

Holly, 38, appeared red-faced as she asked Christine about her dog's very close bond. 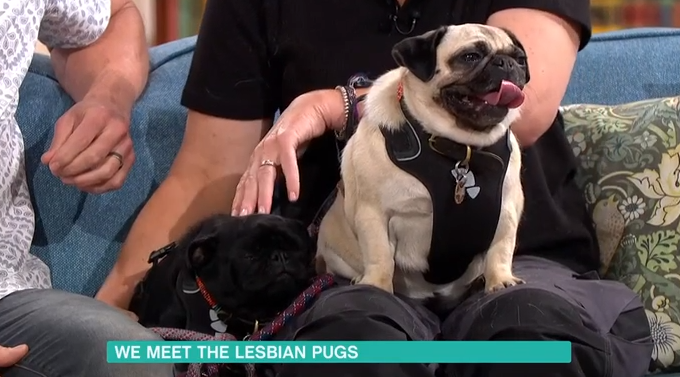 Phil said: "Dogs get on really well together but what makes you think that this is beyond dogs getting on?"

Speaking about Pugly and Nelly, Christine said: "These exhibit an intensity in a relationship that you would regard as a bonding, as a pairing."

Holly asked: "In what way does that manifest itself?"

Christine replied: "They lick each other's faces and ears. They sleep together in close contact. It's almost painful if they haven't.

"Then it progresses. When they get overexcited in the day that may over spill into extra activities. 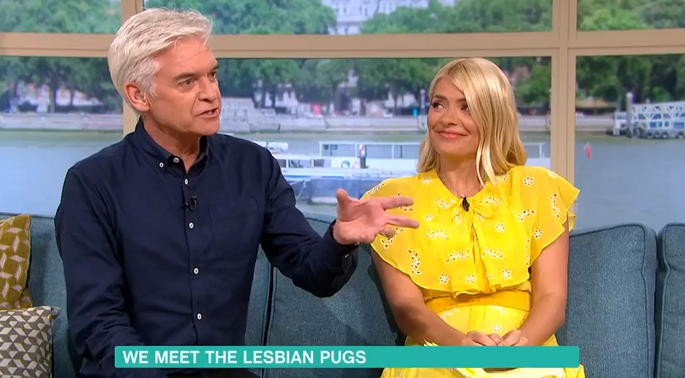 "I can't show you the video now. They will mount each other, but not always on the right end. It's the intensity of the love."

They will mount each other, but not always on the right end.

Christine's comments made Holly descend into giggles and she tried to compose herself.

Phil hit back: "Nelly when she was in heat she was quite happy to go off and see the guys, so she could be bisexual.

"Maybe to her, Pugley is just a friend with benefits."

Holly exclaimed: "Don't say that! You'll ruin what this is." 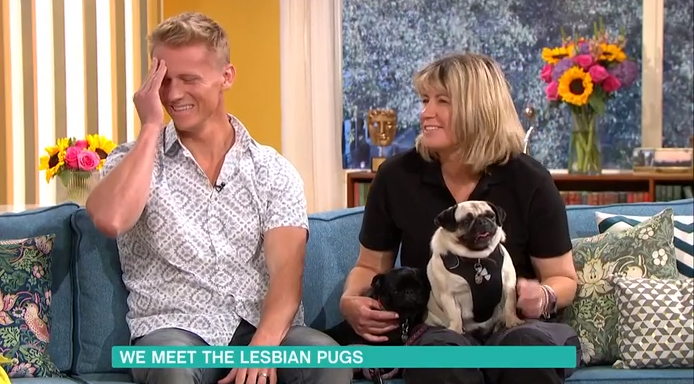 Christine insisted her dogs are loved-up with each other (Credit: ITV)

Viewers were amused by the segment and shared their thoughts on Twitter.

One person said: "Lesbian pugs, I love it," while another wrote: "Omg these pugs are so cute #ThisMorning."

Lesbian pugs, I love it 😂 #ThisMorning

Omg these pugs are so cute #ThisMorning

What did you think of pugs? Leave us a comment on our Facebook page @EntertainmentDailyFix and let us know.