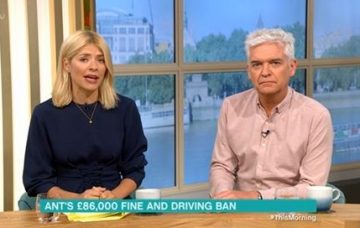 Holly Willoughby and Phillip Schofield began the latest episode of This Morning with a brief reference to their friend Ant McPartlin.

The pair kicked off the show on Tuesday with a short mention of Ant’s court appearance on Monday.

Holly told viewers: “Yesterday, our friend and ITV colleague, Ant McPartlin, pleaded guilty to a drink-drive charge and was given a 20-month ban and a fine of £86,000.”

Phillip took over: “Well, here is what he had to say outside court.”

A video then played of Ant’s remarks outside court, where he said: “Can I say a few words? I just want to say I’m truly sorry for what happened. Higher standards are expected of me, I expect them of myself.

“I let myself down, I let a lot of people down. I am truly sorry. I would like to apologise to everybody involved in the crash. I’m just thankful nobody was seriously hurt. Thank you very much.”

Phillip then said: “And we send our love to everyone who was involved.”

The programme then ran its schedule of stories for the day and continued on as normal.

Holly and Phil received some criticism in March when they failed to mention Ant’s drink-drive arrest on This Morning, despite fellow shows such as Good Morning Britain and Lorraine both covering it.

The pair did discuss the arrest the following day, however, with Phillip, 55, acknowledging he and Holly were “talking about a friend” and it was tough.

He said: “This is difficult for us as we’re talking about a friend here. Like many people we are shocked and saddened by Sunday’s incident involving Ant.”

Holly, 37, said: “We can’t say much more as the matter is still being investigated by the police but we want to wish those shaken and upset by the collision a quick recovery and personally for Ant, we hope he gets the time and space to return to full health.”

He concluded by saying: “The overwhelming feeling, we believe, has to be that no matter who you are, no matter what you do, if you get into a car having had a drink, the responsibility is entirely yours, and we wish all those involved in these sad events all the very best.”

In an interview with The Guardian over the weekend, Holly spoke about This Morning’s decision to not cover Ant’s arrest the day after it happened, saying it was not a deliberate choice.

“Not at all. Everybody knows that Ant is a very good friend of mine and I’ve known him for a very long time,” she said.

“To be honest, on that first day, nobody knew what had happened, and you know, it’s an ongoing police case right now. It’s not something anybody should be talking about. Out of respect for him, I love him to bits, it’s not something that I find very easy to talk about. Because it’s a friend.

“His is not my story to tell. He’s just got to look after himself, that’s all.”

Saturday Night Takeaway star Ant, 42, pleaded guilty to drink-driving during an appearance at Wimbledon Magistrates’ Court on Monday. He was arrested in March after a car collision in Richmond, London. The court was told he was twice the legal limit.

He was handed an £86,000 fine and banned from the roads for 20 months. District Judge Barbara Barnes said she’d taken Ant’s estimated weekly salary of £130,000 into consideration when fining him.

Ant’s publicist said in March the star has returned to treatment and stepped down from current TV commitments. He missed the last two episodes of Saturday Night Takeaway’s latest series, while ITV has confirmed Dec Donnelly will host the Britain’s Got Talent live shows alone next month.