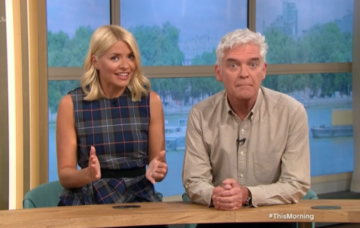 This Morning is being honoured with a special BAFTA award to celebrate the show’s upcoming 30th anniversary.

Hosts Holly Willoughby and Phillip Schofield announced the exciting news during Wednesday’s This Morning, saying the award is to “recognise the continuing success of the programme”.

As well as receiving the award, the show will also be honoured with a tribute event next month.

Opening the show, Phil told viewers: “Good morning and welcome to your midweek This Morning where we have some very exciting news to share.”

Holly continued: “As you know, next month we will be celebrating our 30th birthday and to mark the occasion, BAFTA have decided to honour This Morning with a tribute event and a special award!”

Phil added: “It’s to recognise the continuing success of the programme – celebrating its history and contributors from across its 30 years on air.”

As an image of a BAFTA award popped up on screen, the duo tried to reach out for it. Phil said: “We can’t quite touch it yet.”

Holly revealed she and Phil alongside original hosts Richard Madeley and Judy Finnigan will be at the event on Monday 1 October, which will be filmed and uploaded to the BAFTA website.

And viewers will even get the chance to attend too, as tickets will be available on the This Morning website.

This Morning is receiving the honour in recognition of its “creative and innovative approach to daytime television”, its “popular appeal among the British public” and for “launching the careers of many of those working in the factual entertainment genre today”.

The tribute event will see Holly, Phil, Richard and Judy share insights from the show over the years, show archive clips and special video interviews before they get presented with the award.

Heads of ITV daytime Jane Beacon and Clare Ely said: “It is a huge honour for This Morning to receive this special BAFTA award during its 30th year, and we feel immensely proud of the whole team for this well-deserved recognition within the industry.”

Krishnendu Majumdar, Chair of BAFTA Television Committee, said: “For 30 years, the talent, innovation and boldness of This Morning has made it an exceptional contribution to television.

“BAFTA is delighted to be recognising the programme’s achievements at a special tribute event and wish it every continued success.”

Are you a big fan of This Morning? Who is your favourite presenting duo on the show? Leave us a comment on our Facebook page @EntertainmentDailyFix and let us know what you think