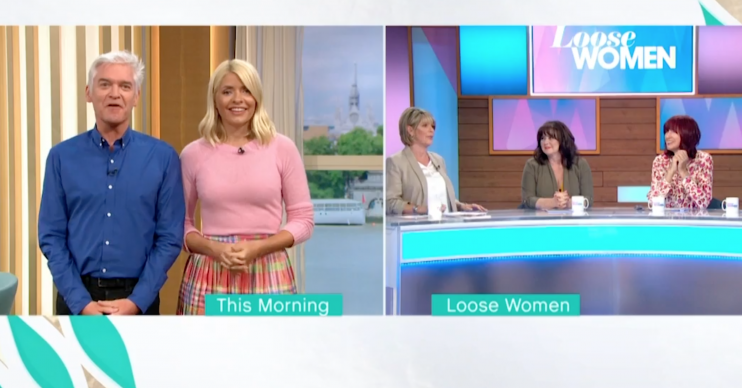 Twitter users think they have spotted the moment that led to Ruth Langsford reportedly making a complaint against Phillip Schofield.

Earlier this week, ITV bosses blasted claims that This Morning host Phillip is embroiled in a series of feuds with fellow presenters including Ruth and Holly Willoughby.

It was claimed that Ruth “made an official complaint” about Phillip, with a number of staff allegedly speaking of a “toxic atmosphere” on set.

Now users on social media have unearthed a clip that aired in April that appears to show a “furious” Ruth annoyed at having been interrupted by Phillip.

In the clip, Ruth is seen trailing that morning’s episode of Loose Women, before Phil interrupts her and cuts the segment short.

Appearing to slam down her pen, Ruth can be heard to say: “I only had about two more words to say but don’t worry.”

One Twitter user posted the clip to social media and said: “Look at her slamming the pen down in fury.”

According to tomorrow’s papers Ruth Langsford has lodged an official complaint against Phillip Schofield over this… Look at her slamming the pen down in fury 🤣🤣🤣 pic.twitter.com/TP041pYJoW

However, ITV rubbished the claims of issues at This Morning, suggesting co-anchor Phil is the target of “malicious gossip”.

Read more: Susanna Reid is given a mute Piers Morgan button for her birthday

Others claimed that they could tell that Ruth doesn’t like Phillip.

Although some Phil fans pointed out that he would’ve had a producer in his ear telling him to wrap up the segment and said he did “nothing wrong”.

That’s bloody ridiculous. He most probably had people telling him to wind it up. @RuthieeL should know what’s it like.

Amanda Holden – who has a long-running feud with Phillip – also waded into the argument this week.

Speaking on her Heart Breakfast Show, she praised TV figures for allegedly “taking on” the veteran TV host.