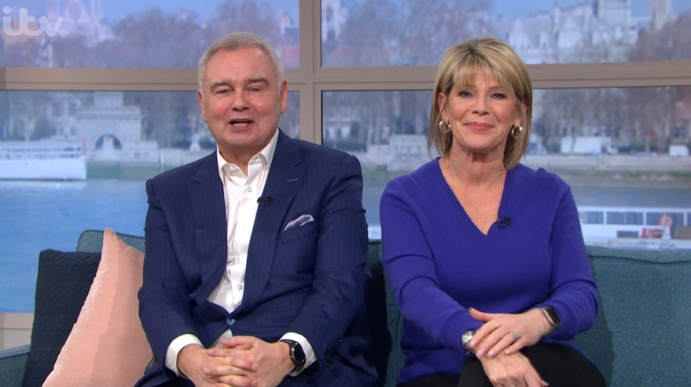 The rumours have been rife for months

TV’s Eamonn Holmes appeared to make a dig at the This Morning ‘feud’ rumours on today’s show.

Over the past couple of months, reports have suggested there has been some tension between Phillip Schofield and Eamonn‘s wife Ruth Langsford after she allegedly made a formal complaint to TV bosses about him – something ITV denied.

On Friday’s programme, Eamonn appeared to take a subtle swipe at the rumours when the show cut to Loose Women.

Read more: Eamonn Holmes ‘has no issues’ with Phillip Schofield despite NTAs rumours

As the daytime show linked to Loose Women to see what was coming up on the programme, Nadia Sawalha and Linda Robson were jokingly play fighting.

As Eamonn and Ruth watched the stars roll around on the floor, he said: “Oh dear. Oh dear. It’s worse than in here,” as Ruth chuckled.

Ent Daily has contacted reps for Eamonn for comment.

It comes after Eamonn insisted he has “no issues” with Phil following reports they clashed backstage at the National Television Awards.