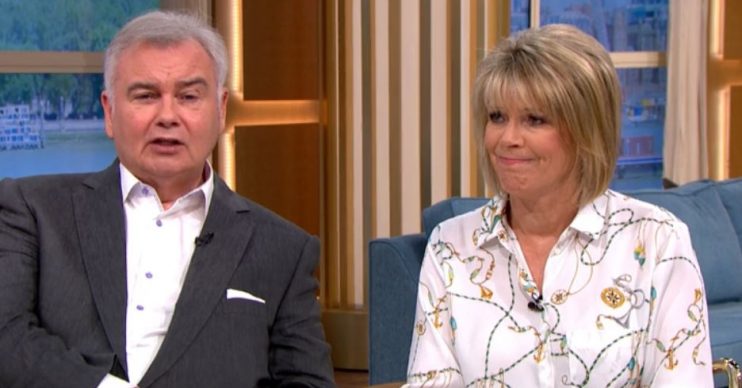 They've been married for nine years

One of daytime TV’s best-loved couples, This Morning co-presenters Eamonn Holmes and Ruth Langsford, have revealed they once came close to splitting up after a fiery row.

The presenters, who are currently hosting the show while regulars Phillip Schofield and Holly Willoughby take a break for summer, spoke on today’s (July 18) episode about the time they almost parted ways for good.

Speaking to Vanessa Feltz after a phone-in about getting back with ex partners, Eamonn said: “You know, 20 odd years ago plus I tried to make Ruth my ex.”

Ruth admitted with a sigh: “It was our first row. You’re so dramatic.”

The pair have been together for 24 years and married for nine.

Explaining what happened, Eamonn revealed: “I said, ‘That’s it, this is not working, goodbye.’ And I went to close the door and she pushed it back and do you know what she said to me? [She said]’Oh, don’t be stupid’.”

Vanessa asked if that was the moment Eamonn realised he was so in love with Ruth, he would never survive without her.

Ruth quipped that the pair had been “rowing ever since” and Eamonn said she had asked why he would want to dump her.

He then looked like he was about to list all the reasons to dump Ruth, but Vanessa quickly told him, laughing: “Don’t you dare!”

Eamonn and Ruth might not be afraid to poke fun at one another, as Ruth did recently when it was revealed that her husband’s image had been used in an online scam about erectile dysfunction remedies.

But they can be there for one another when it’s needed most.

Ruth’s beloved sister passed away last month and Eamonn thanked fans for their messages of support as he held the This Morning fort alongside Rylan Clarke-Neal, who served as a guest presenter while Ruth took some time off to process her grief.

I just wanted to say , if I haven't done so directly,Thank u for your kindness and compassion towards Ruth and the loss of her sister Julia. We both loved and cared for Julia with all our hearts and will miss her forever. Your love and kind words have been a great help.Thank you

Eamonn wrote on Twitter at the time: “I just wanted to say, if I haven’t done so directly, thank you for your kindness and compassion towards Ruth and the loss of her sister Julia.

“We both loved and cared for Julia with all our hearts and will miss her forever. Your love and kind words have been a great help. Thank you.”

When Ruth returned to the show on Monday (July 15), they didn’t bring up her sister but Eamonn told his wife lovingly: “It’s very nice to see you back, darling.”