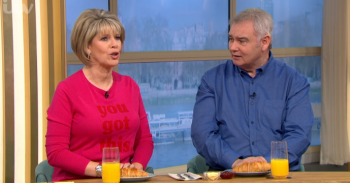 The presenters couldn't agree on how to say it

Eamonn Holmes and Ruth Langsford were back to bickering on today’s This Morning – this time over how to pronounce ‘leprechaun’.

The married couple got into a debate over how to say the word after Eamonn discussed what was coming up next in the show, which was a segment about the mythical creatures that appear in Irish folklore.

Unconvinced by how her husband said it, Ruth quizzed: “Is that how you pronounce it?”

But a resolute Eamonn told Ruth that’s exactly how it should be said.

The disagreement soon sparked a wave of tweets, and This Morning also ran a poll asking its followers how they say it.

“Question of the day,” the tweet read. “How do you pronounce leprechaun? Is it horn or corn?”

Question of the day… how do you pronounce leprechaun? Is it horn or corn?@EamonnHolmes @RuthieeL #ThisMorning

However, lots of people tweeted the show to say it wasn’t pronounced ‘horn’ or ‘corn’.

“Neither. No ‘r’ pronounciation at all. ‘Hawn’. Like Goldie Hawn. Leprec-Hawn,” one pointed out.

“Both wrong! It’s pronounced LEPRECAWN,” said someone else.

Neither. No ‘r’ pronunciation at all. “Hawn”. Like Goldie Hawn. Leprec-Hawn

It comes after the pair were blasted by viewers for acting in an “unprofessional” manner when they argued live on air last month.

Things quickly turned awkward between the couple when they interviewed selfie star Karen Danczuk about her pay-per-view photo site.

Clearly disagreeing with each other, they began to openly argue.

One viewer wrote: “I think Deidre needs to sort out Eamonn and Ruth 🙄🙄 you can actually see the hate in his eyes towards her today 😂 #ThisMorning.”

“These two need to be more professional and keep their ‘bickering’ off camera and stop acting like 2 year olds!”

What do you think of Eamonn and Ruth bickering live on air? Leave us a comment on our Facebook page @EntertainmentDailyFix and let us know.