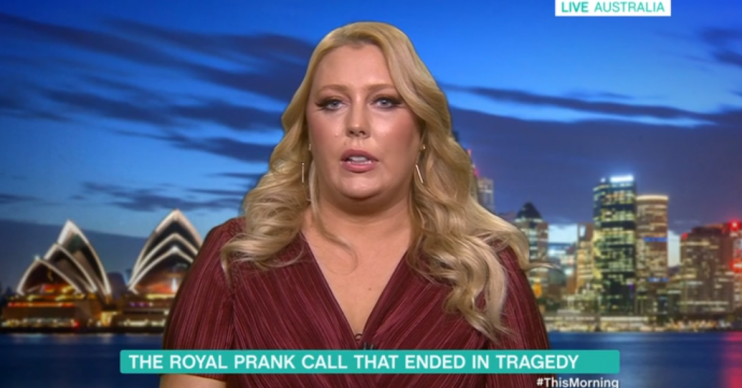 The incident happened in 2012

The Australian radio DJ behind a prank call to the hospital where Kate Middleton was being treated considered suicide over backlash she received.

In 2012, Mel Greig and her 2Day FM radio co-star Mike Christian hit headlines when they pretended to be the Queen and Prince Charles in a prank call to the King Edward VII hospital, where the Duchess of Cambridge was being treated for severe morning sickness while pregnant with Prince George.

They got through to nurse Jacintha Saldanha, who fell for the hoax and transferred the call to the nurse looking after the Duchess.

Private medical details were then spread across the world resulting in a media storm.

Three days after the incident, Jacintha took her own life.

Now, seven years on, Mel has admitted her life is still affected by it and she’s trying to help those who have been effected by mental health issues as well as victims of online bullying – something she received after Jacintha’s death.

Speaking to This Morning hosts Eamonn Holmes and Ruth Langsford on Monday’s show, Mel admitted she considered taking her own life.

She said: “If I’m perfectly honest, it’s been hard to live. About six months after the prank call, I contemplated whether I should still be here.

Seven years on from the royal phone call prank which ended in tragedy and still ‘haunted’ by the events – Australian DJ Mel Greig spoke to us from Sydney to discuss her guilt, and explain how she’s rebuilding her life pic.twitter.com/rLEym4QSVB

“I remember sitting there on the bathroom floor, just thinking, ‘am I ever going to get through this? Is this what my life is like now?’

“In that moment when I chose life, I decided to move forward and to learn what I could from what happened and help other people.”

She continued: “[The prank call] still to this day affects my employment, my relationships, my friendships. It’s something that is always going to be there.

“I don’t want it to define me but I can’t avoid it because it still interferes with my life.”

“But when that did happen, I remember writing an email to the team saying, ‘let’s dub over the nurses’ voices, let’s take out the private information’ because it was never about that. It was about how silly our accents were.”

Talking about the aftermath of the prank before Jacintha’s death , Mel admitted: “I’m embarrassed to admit that I did enjoy a few moments of it because we were worldwide news and everybody was laughing with us, it appeared.

“Then when tragedy struck, a lot of media outlets felt very embarrassed for highlighting what we done and I feel that’s where this huge witch hunt took place.”

Read more: Bookies slash odds for Kate AND Meghan to have babies next year

Mel said she attended Jacintha’s inquest along with the nurse’s family and apologised to them, including Jacintha’s daughter, face-to-face.

She said: “I wrote my will the night before, thinking I wouldn’t be going back to Australia after the inquest.

“I felt that at the end of the inquest, when I looked at the family in the eye and apologised, a connection with Jacintha’s daughter and I could see that she knew I didn’t take that joke as a joke, that I took it seriously and I was so sorry about what happened with her mother.”

Speaking about how she wants to help others, Mel said: “If I’m going to be in the press, I may as well make it for a good reason.

“Whether it’s talking about endometriosis or mental health or the cyber bullying that I went through, I want to try and raise awareness for all those things with the platform I’ve been given.”