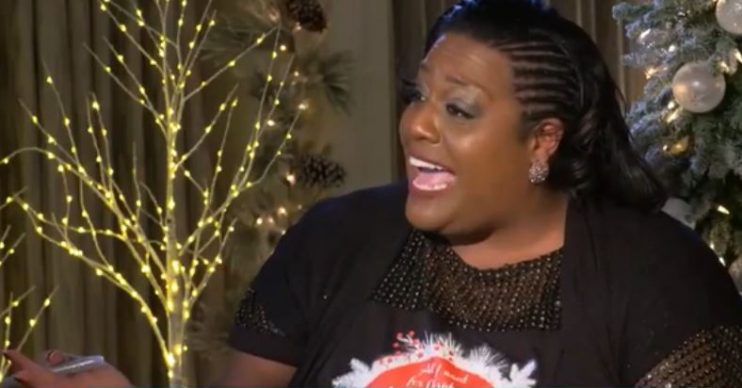 Singer and undisputed Queen of Christmas Mariah Carey accused Alison Hammond of “mocking” her in a hilariously awkward interview on This Morning.

On Thursday’s episode of the popular daytime programme, the bubbly presenter got to meet the All I Want For Christmas hitmaker and talk about the festive period.

After the pair sat chatting as they got creative and made their own Christmas cards, Alison said to Mariah: “Obviously, you’re very good at writing Christmas songs. I was just wondering if I could run my tune past you and…”

You don’t have to look at me because it’s a bit intimidating.

“I would have you keep it to yourself,” Mariah replied.

Alison burst out laughing but pressed on: “Do you know what? I’m going to go for it anyway because it’s not finished. You don’t have to look at me because it’s a bit intimidating.”

The host then closed her eyes and proceeded to warble the words ‘Merry Christmas’ over and over as she clicked her fingers and swayed to the slow beat.

When it was over, Mariah demanded after a brief silence: “Are you mocking me?”

“No!” Alison told her, shocked.

Mariah said: “Are you mocking me, Alison!? After I made you this card and everything?”

Relenting, Mariah admitted: “It’s fabulous. Maybe add a little ‘To youuu’ at the end of it.”

Alison is best known for her hilarious interviews with global singers, Hollywood A-listers and other big name celebrities on This Morning.

But earlier this week, she delighted fans by revealing she’s going to be taking part in the next series of Celebs Go Dating.

The 44-year-old roving reporter – mum to 13-year-old Aiden, who she shares with her ex Noureddine Boufaied – has been confirmed for the next series of the E4 dating show after being single for two years.

She said in a post shared on Instagram: “I’ve always given my heart and soul to my career and I think it’s time now to give some quality time to dating.”

The former Big Brother housemate continued: “I’m already complete, I’m looking for someone who’s secure, together and got their [bleep] going on! “I’m ready to find that one. Or you never know, maybe two!”

What did you think of Alison’s Mariah interview? Leave us a comment on our Facebook page @EntertainmentDailyFix and let us know.