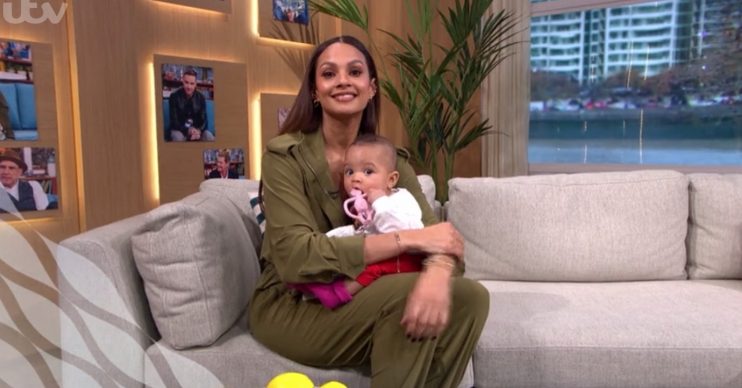 She looked so cute!

Viewers of This Morning got an extra treat today (Friday February 28 2020) when Alesha Dixon popped in to speak to hosts Eamonn Holmes and Rochelle Humes.

Not only did Britain’s Got Talent judge Alesha talk about the grand final of The Greatest Dancer tomorrow night (Saturday February 29 2020), she also brought in her adorable baby daughter Anaya into the studio for her debut TV appearance.

And it wasn’t long until the little one stole the show.

During her chat, Alesha – also mum to six-year-old Azura – joked: “Babies seem to have been the theme in The Greatest Dancer.

“Because for season one, I was pregnant during the live shows as well and no one knew, and then during season two I was very heavily pregnant, so it was a bit confusing for the audience because there I was nine months pregnant, and then next minute carrying the baby!”

Viewers then heard a baby murmur in the background and it wasn’t long until Alesha heard it, too.

“Can you hear my child? Sorry!” she laughed. “This is her first time in the studio!”

Cameras focused in on Alesha’s husband Azuka Ononye, who was holding the tot.

It wasn’t long before legions of viewers took to Twitter to coo over little Anaya.

“Aw the cutest babe,” another wrote.

A third wrote: “I love @AleshaOfficial and her family’s stunning,” followed another hearts-for-eyes emoji.

With Anaya stealing the show, Eamonn asked mum-of-two Rochelle if she was broody, to which she answered that she ‘was always broody’.

After predicting Rochelle would have another baby in the next three years, Alesha said: “I’ll go again next ’cause I’m running out of time!”

Anaya was born in August 2019 but Alesha announced her birth a couple of months later in October.

“7 weeks ago this little angel came into our lives!,” she captioned an image of the tiny baby at the time.

“As I celebrate my birthday today I feel like the luckiest girl on the planet.”

Alesha soon showed off her incredible post-baby figure when she began work on America’s Got Talent.