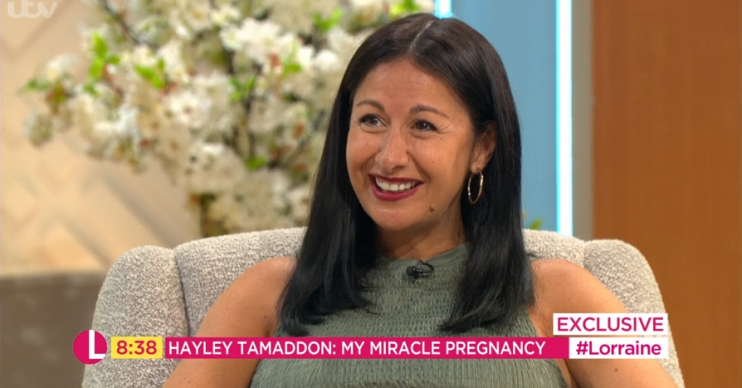 Hayley revealed the sex of her baby on live TV

Hayley Tamaddon accidentally let slip the sex of her baby on live TV today (Thursday May 23) – and opened up about previously suffering a miscarriage.

The former Coronation Street star told TV presenter Lorraine Kelly she would bring “him” to meet her when she gives birth, only to realise she had given away the sex of her impending baby boy to the nation.

Speaking about the future on Lorraine, Hayley – who got engaged to partner Adrian earlier this month – said: “I think the mummy first and then the bride can wait just a little bit.

Hayley says discovering she was pregnant at the age of 42 was the “most unexpected news”, and admitted she has previously suffered a miscarriage, but the devastating event “taught” her she could become pregnant.

She said: “I feel great. It is the most unexpected news but the best news for me.”

Speaking about why she didn’t think she would be able to conceive, she said: “There are a few reasons why.

“I’m 42 and you get to 40 and think, ‘I think that’s it’. I’ve read there’s only a 5 per cent chance after 40 per month of a women getting pregnant and the risk of miscarriage increases massively.

“And sadly, we did go through that and what that taught me was that I could get pregnant.

“I’ve had a lot of ovary trouble from a teenager all the way through my life, with ovarian cysts bursting here there and every way, which is not great.

“You add everything up. It took my mum seven years to have me in the 70s, I was kind of classed as this miracle baby.

“You weigh all these up and think I’ve got to the age of 40 and it’s never happened. I’m going to throw myself into work and I’m ok with the fact that maybe this isn’t my path. So I’ll just work.

“I found myself single and I’m 40 years old thinking, ‘Well that’s my time gone. Be OK with it.’ And people would say you’ve never had kids are you alright. I would say ‘No, no I’m very career-minded.’ ”