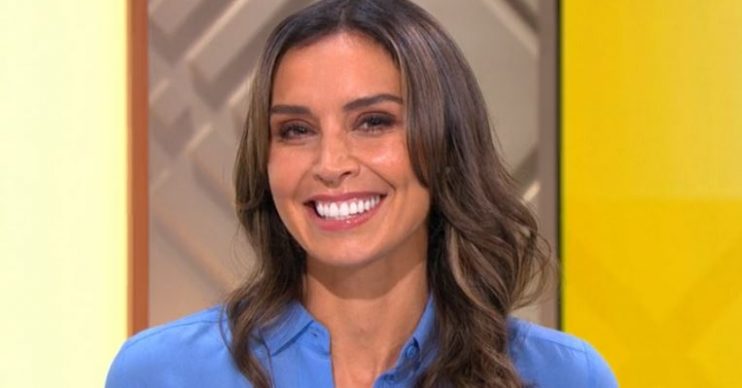 Christine's filling in for Lorraine Kelly

Christine Lampard has revealed on Lorraine that her adorable daughter, who turned 10 months old at the weekend, is “desperate” to start walking.

Speaking on today’s (July 22) episode as she filled in for host Lorraine Kelly, the Loose Women star said her baby is trying her hardest to walk – but her “little legs” aren’t quite there yet.

Asked about her daughter, Christine, 40, said: “She’s doing great. She turned 10 months this weekend, so desperate to walk. But her little legs can’t quite carry [her] yet, so she’s trying to pull herself up.”

She continued: “So this time last year I was sitting here pregnant! It all happens very quickly. But she’s great, she’s a really cute, chubby-little-faced thing. You just want to eat her up.”

She also talked about her former footballer husband Frank’s new job as the manager of his old club, Chelsea FC, calling the post “a huge job to take on” but one he could not refuse.

Christine gave birth to Patricia, her first child, in September.

She revealed the big news on Instagram with a snap from the hospital, captioning the photo: “Let us introduce you to our little girl. Patricia Charlotte Lampard! We’re so in love.”

Speaking about the name choice during an episode of Loose Women earlier this year, Christine admitted it was “very old-fashioned, very traditional” but was Frank’s mum’s name.

She told her fellow panellists that Frank had been “obviously incredibly close” to his mum, who died in 2008.

Christine said: “We’ve gone very old-school with the name. A lot of people said, ‘Oh that’s a very old name’ but there’s a link and it means a huge deal to [Frank].”

Frank has two other daughters, Luna, 13, and Isla, 12, from his relationship with ex-fiancée Elen Rivas.

Last month, the couple enjoyed their first holiday with baby Patricia and Christine shared a very sweet moment from their trip with fans.

She posted a picture of herself holding the tot, then nine months old, as she stood near a pool and looked out over the incredible view from the villa where they were staying.

In the caption, she called Patricia her “cute little love”.