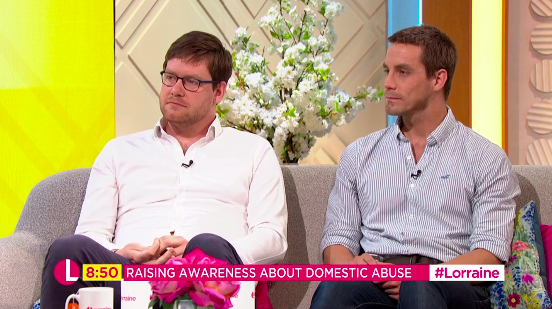 They are trying to raise awareness of domestic abuse

Lorraine viewers expressed their admiration and heartbreak for two brothers, who appeared on the morning show to discuss the horrifying murder of their mum and sister.

On Wednesday (July 10), Luke and Ryan Hart spoke to Lorraine Kelly about their controlling father who killed both their mother, Claire, and 19-year-old sister, Charlotte.

Read more: Lorraine Kelly admits that she used to be ‘too thin’

In a searingly honest interview, the siblings recalled how they hadn’t recognised their father’s behaviour as domestic abuse because he had seemed so “weak”, while the female members of the family were “so strong”.

They explained how they had never seen any violence in the home and didn’t realise how damaging their father’s coercive control had become over the years.

Ryan revealed: “Sharing our story and helping other people, is what helps us get through each day, I think, and to look to the future.”

Read more: Michelle Heaton berated by viewers for ‘milking’ her menopause on Lorraine

On growing up in the household, he added: “I learnt to submit to his rules and commands as it seemed safer. Charlotte was always the one out of the family who stood up and she knew what was right. I think our father was scared of Charlotte and we definitely admired Charlotte a lot for her strength and bravery.”

“Actually, he’d ramped it up significantly building up to the murders.”

He explained how they had all saved up money to support their mother and sister to finally move out of the house, adding: “We managed to, when our father was away at work, to get mum out of the house and moved to a new rental house.

“It was only five days after we moved them out that our father then hunted them down and killed them both.”

It was July 19 2016, when Claire and Charlotte went for an early morning swim at their local leisure centre in Spalding, Lincolnshire.

It was a trip they made often, but this visit would be their last.

At 9am, mother and daughter left the pool and made their way back across the car park to their blue Toyota Aygo – only for Claire’s husband Lance to crawl out from underneath it and shoot them both with a single-barrel shotgun.

He then turned the gun on himself.

On how he heard the terrible news, Ryan said: “I was working abroad in Holland at the time. I got back to my desk after some meetings, checked an app on my phone for the news and saw the breaking news story of ‘three dead in a shooting in Spalding’.

“Over the next few hours it slowly unravelled. It took me, I would say, a month, to accept it –  until the funerals –  that I really accepted what had happened. That day was spent in a state of confusion, shock, anger.”

Luke added the family had not recognised how the controlling behaviour was the archetype of domestic abuse. He said: “Mum and Charlotte were incredibly strong, which is part of the reason we never thought it was domestic abuse. We always saw our father as incredibly weak.

“She was an incredible mum and she looked after us above all else and Charlotte was incredibly brave and courageous and would often call our father out for what he was doing and say it wasn’t right. […] Our father hated Charlotte because he saw her as really ruining his control over our mother.”

Ryan added: “We recognise our story is not unique. We didn’t see ourselves as victims, as we were not being hit. But domestic abuse is about control and power and [people must] look out for the non-physical abuse. The scars internally that I’ve had to live with from the abuse from my father take much longer to get over and heal from.”

Lorraine viewers watching from home were understandably moved by Luke and Ryan’s testimonies, with one tweeting: “How brave of these guys to turn their time to helping others and raising awareness after such personal loss. Your mum and sister would be so proud of you.”

Another said: “Big hugs to you both for raising awareness and showing courage in your own journey through this.”

How brave of these guys to turn their time to helping others and raising awareness after such personal loss. Your mum and sister would be so proud of you.

A third added: “Such a terrible sad story!! Wishing them both all best for the future in their campaign.”

If you have been affected by this story, please click here for information on domestic abuse helplines.