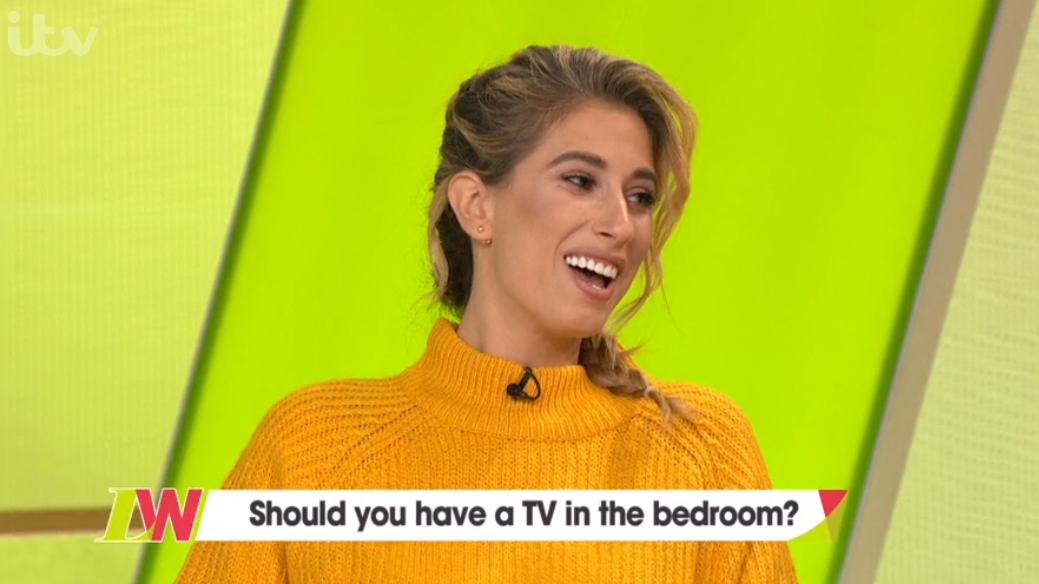 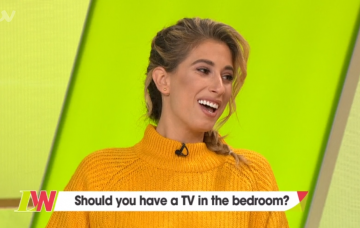 She said she has a "wonderful" sex life

Stacey Solomon has revealed she watches her “favourite films” whilst she’s getting intimate with boyfriend Joe Swash.

The Loose Women panellist made her confession to her co-stars on Tuesday’s edition of the daytime show.

Stacey insisted that she doesn’t see anything wrong with having a television on in the bedroom, even when she’s having sex with Joe – who she has just moved in with.

The panel were discussing whether it’s OK to have a TV in the bedroom.

As Janet Street Porter, 71, revealed she has never had a TV in her bedroom, Stacey admitted she and Joe have a television in their room.

Janet scoffed: “Well you must not have a sex life then.”

To which Stacey retorted with a smile: “Excuse me Janet, my sex life is wonderful thank you. And I get to watch my favourite films at the same time.”

Janet replied: “I’m just getting over that image of you, Joe and a 70-inch television and a lot of clothes around it. I’ve never had a television in the bedroom ever.”

The TV personality, 29, has previously revealed that she is a “lazy” lover – something Stacey discovered after watching several sex scenes in TV dramas.

The star was a viewer of BBC dramas Bodyguard and Wanderlust, both of which feature graphic lovemaking scenes, and from seeing the fictional romps on display Stacey has realised that she isn’t doing much work in the bedroom with Joe.

She said on the show earlier this year: “If TV is anything to go by I am super-lazy, honestly! There are certain things where they make me feel like I’ve done a workout just watching it.”

Stacey also gave a tantalising glimpse into her bedroom antics with Joe, 36, admitting that when he does want to get more adventurous between the sheets the positions often leave her “sweating”.

She added: “There are some things that you do and you think, ‘I don’t think I can retain this position.’ My thighs are burning and I’m sweating.”

However, it seems things are more active in between the sheets than they used to be between the pair as in February Stacey compared their lovemaking to being like “a tumbleweed”.

Describing their lovemaking, she said: “It’d be like a tumbleweed … What makes me laugh is that ‘can we survive a marriage without sex?’

“Why is there so much pressure on a marriage to be all that sexual?”

The couple recently moved in together and Stacey shared a sweet family pic to Instagram showing herself, Joe and her two sons – Zachary, 10, and Leighton, six, – from inside the new family setup.

She wrote: “HOME SWEET HOME. Finally all in and ready to start a fresh together.”

Referring to their dinner, she added: “If you’re wondering what’s going on here… we are eating a Chinese out of random Christmas dishes, using our hands, whilst sat on washing baskets and cardboard boxes eating off of a cat basket. Nothig (sic) to see here…”

What did you think of Stacey’s bedroom confession on Loose Women? Leave us a comment on our Facebook page @EntertainmentDailyFix and let us know what you think!