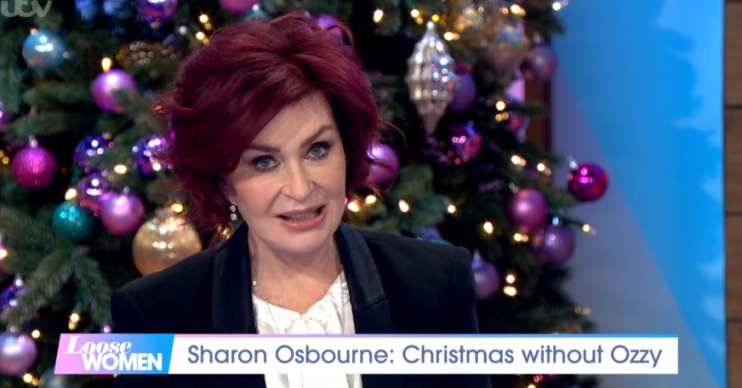 He's unable to fly to the UK

Sharon Osbourne revealed she won’t be spending Christmas with husband Ozzy on today’s Loose Women because the heavy metal star cannot fly to the UK due to his spinal injury.

The star is spending the festive period in England, her home country, as she is starring in stage show Nativity! The Musica’ at the Eventim Apollo in London.

But Ozzy will not be joining her because doctors have advised him not to travel by plane due to the seriousness of the damage to his back.

The Black Sabbath rocker was hospitalised earlier this year after suffering a fall at his LA home, which dislodged the metal rods in his spine that had been put in after a quad-bike accident in 2003 and the tumble also caused his spinal cord to become compressed.

Ozzy fell and damaged his spine and it’s kind of been a domino effect.

Sharon, 67, admits she is very sad that she will be separated from 71-year-old Ozzy – who will remain at their Los Angeles home – but is looking forward to spending Christmas Day (25.12.19) with their daughter Kelly Osbourne.

“The doctors didn’t want him to get on the plane and Ozzy was quite nervous about flying all that way.”

Revealing she will spend a lot of the day chatting to Ozzy on FaceTime video calls, she added: “All day FaceTime, he rings all the time. He’s like, ‘What are you doing now?'”

Sharon admits that she and Ozzy have different opinions about Christmas as she loves to spend, spend, spend and treat her family and friends, whereas the Bark at the Moon singer thinks the season is “over-hyped” and too much about consumerism.

“It’s not the right thing to do but at the time I want to be Mrs. Christmas. Ozzy thinks that Christmas is just over-hyped and that people go into it with the wrong spirit. He’ll go, ‘When I was a kid I used to get one satsuma and some string.’

“And when the adverts come on, he’s a bah humbug, he’s like, ‘This is ridiculous!'”