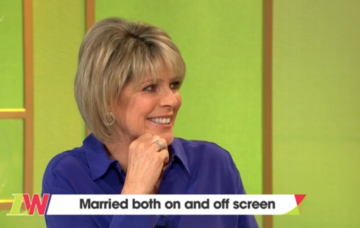 These two are couple goals!

Eamonn, 58, joined his wife on the daytime show to celebrate 30 years of This Morning, as they opened up about being married and working together.

But the presenter made Ruth, 58, well up by saying he falls in love with her all over again “every time I see her”.

Speaking about being together for 22 years, Eamonn proved that their relationship is stronger than ever.

After watching a clip of Ruth with their son Jack, 16, on the show, Eamonn told an emotional Ruth: “I swear this happens to me every time, she’s got Jack there as a baby, I look and I go, ‘Who is that gorgeous woman?’

“I fall in love with her every time I see her and I realise why I fell for her and why I’m absolutely in her power, in her grip all the time.”

The couple spoke about being put together on screen for This Morning, with Eamonn revealing Ruth wasn’t keen at first.

He said: “They had the idea of putting us together. I said, ‘Great, super!’ I was unemployed at the time, sort of helped me quite a lot.

“I said, ‘They want us to present together’. And she [Ruth] said, ‘That’s not happening.’”

While discussing their on-air bickering and hilarious antics on the show, Eamonn also revealed Ruth “lifts her heel” and “scrapes” his shin if he gets “annoying”.

Eamonn said: “Her secret is she stands behind that cookery bench thing and she lifts her heel and she scrapes it down the front of my shin and then puts the stiletto right into my foot.”

Ruth laughed: “If he’s been annoying me, I think, ‘You wait, we’ve got cookery soon.'”

Meanwhile, the couple revealed they will be joining the rest of the This Morning team to accept a BAFTA award to mark 30 years of the show on Monday night.

Would you be able to work with your partner? Head over to our Facebook page @EntertainmentDailyFix and let us know what you think!