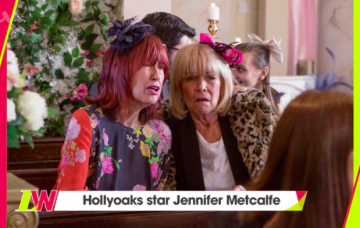 Linda and Janet were very professional on set

Tuesday’s episode was one to remember as two of the Loose Women panellists headed off to film a hilarious cameo on Hollyoaks.

Linda Robson and Janet Street Porter made viewers laugh as they made faces posing as ‘guests’ at Mercedes McQueen and Russ Owen’s wedding.

Linda said she was “beyond excited” to be filming for one of the Channel 4 soap’s biggest storylines in years.

They then chose outfits as wedding guests, and Janet told Linda her fascinator looked “very common”.

After getting dressed and made-up, the TV stars greeted actress Jennifer Metcalfe – who plays Mercedes – dressed in her veil and dress.

The director promised to give them cues as they took their seats at the back of the church.

Linda joked that she had lent Jen the white dress and she “better not stretch it”. She also revealed that Jen had drunk two pints in the pub at lunchtime before filming scenes.

As filming began and they pulled silly reaction faces, Janet joked: “Give me that Academy Award!”

Afterwards, Linda, 60, asked her friend how she thought they’d done and the presenter replied: “You let me down.”

The Birds of a Feather star teased back: “Hopefully the children won’t turn off when they see your face, Janet.”

Back in the studio, the ITV lunchtime show then featured an interview with soap star Jennifer, 36.

The TV star, who first appeared on Hollyoaks in 2006, told Janet and Linda: “You two were amazing!”

She also revealed that they will actually appear in two different scenes.

We can't wait to see the Loose Women star alongside @missjenjomet in the big @Hollyoaks wedding! pic.twitter.com/eija0as4WU

You can catch their cameo on Hollyoaks this Friday during a one-hour special episode.

We are very excited to see those excitable faces in the background. Nicely done, Linda and Janet.

Will you be watching out for the ladies on Hollyoaks? Leave us a comment on our Facebook page @EntertainmentDailyFix and let us know what you think.