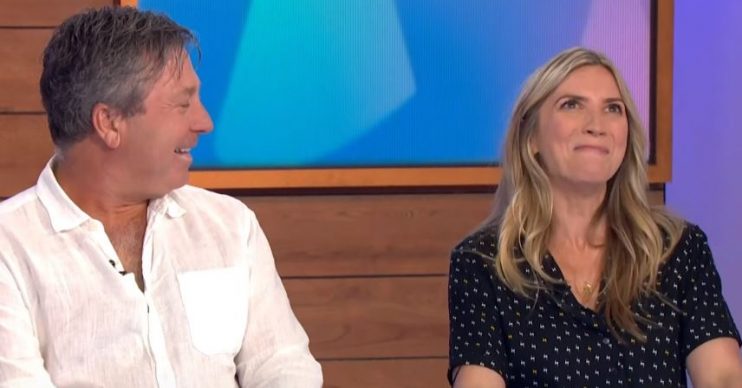 They were on holiday in India

Presenter and actress Lisa Faulkner has opened up about her husband John Torode’s “very romantic” festive proposal on Loose Women – and revealed it initially left her “mortified”.

Appearing on today’s (July 19) episode, former EastEnders star Lisa said MasterChef host John popped the question on Christmas Day while the two of them were away in India.

She told the panellists: “It was a very romantic proposal. Well, he asked me on Christmas Day. And we were in India and he said to me, ‘We can only have one present each’.

“Okay fine. So I gave him a pair of Yoga pants and he gave me… a ring!

“I was so embarrassed. Mortified! I had no idea, no idea. And actually the box was bigger than a ring box and I thought, I don’t know what that is because it looks like it might be some sort of jewellry.”

John said: “Lisa had tried on a ring a number of months before. She’s never tried a ring on ever. And she tried this ring on in the shop and went, ‘What do you think of that?’

“And I went, ‘Yeah, whatever’. I walked away and she didn’t know, but I went back and bought it.”

Asked how they celebrated their engagement, John explained: “We had breakfast, we had a lunch which cost about five quid.”

John continued: “We swam in the sea, watched the sun set.”

Lisa revealed their engagement news on Instagram in January.

She shared a snap of the two of them looking loved up for her 126,000 followers and gushed about their future together.

She simply captioned the photo, which showed her wearing a new diamond ring shaped like a flower: “All you need is love.”

My gorgeous John completely surprised me on Christmas Day and asked me to marry him! After waiting to tell our family when we got home we then had a few days just grinning at each other!! Im so very happy to share our lovely news with you. Happy 2019 it’s going to be quite a year and I’m going to embrace every minute of it. All you need is love. Love is all you need. ❤️💍❤️💍❤️💍❤️

John and Lisa have been in a relationship since 2015, having got to know each other after Lisa won the 2010 series of Celebrity MasterChef.

The pair actually first met years ago on ITV’s This Morning, although John admitted he can’t remember the moment today.

He said on Loose Women: “We met on This Morning 20 years ago, I don’t remember but apparently we did.”

The couple currently have their own cooking show, John And Lisa’s Weekend Kitchen.