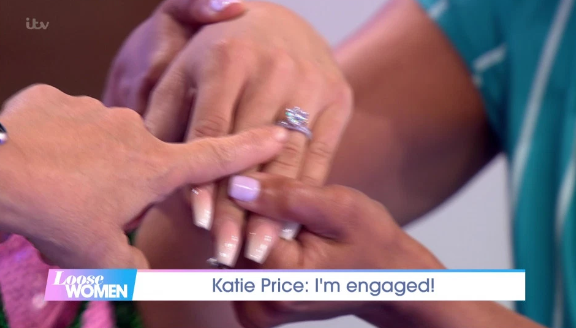 She's not divorced the third husband yet!

Katie Price and Kris Boyson are engaged, the reality star has revealed.

Katie’s boyfriend picked the ring and popped the question and she had no hesitation in saying yes.

Announcing her happy news on TV show Loose Women on Thursday (25.07.19), she said: “Kris bought the ring for that finger, so there you go, I’ve got luck in my life.”

Katie, 41, also revealed the thing she most loves about Kris is that he puts her in her place unlike her other former husbands, Peter Andre, Alex Reid and Kieran Hayler.

She said he’s also a wonderful stepdad to her oldest son, 17-year-old Harvey, who has special needs.

Even though she is going to get married for a fourth time Katie believes that she would still be happily wed to third spouse Kieran if he hadn’t had a string of affairs.

The former glamour model said: “The thing is with me and Kieran is that we would have never have split up if he behaved himself and knows it.

“I get on so well with Kieran, the banter we have, we get on so well, we have two children, it’s so nice when you get on with your ex when you have children.

“Everyone says Kieran still likes me, but who wouldn’t? Come on!”

Read more: Katie Price ‘apologised to bride’ after upstaging her at wedding

As well as Harvey, Katie has son Jett, five, and four-year-old daughter Bunny with Kieran and Junior, 14, and Princess, 12, with her first spouse Peter.

Leave us a comment on our Facebook page @EntertainmentDailyFix! and let us know how you’re keeping cool in the heat.