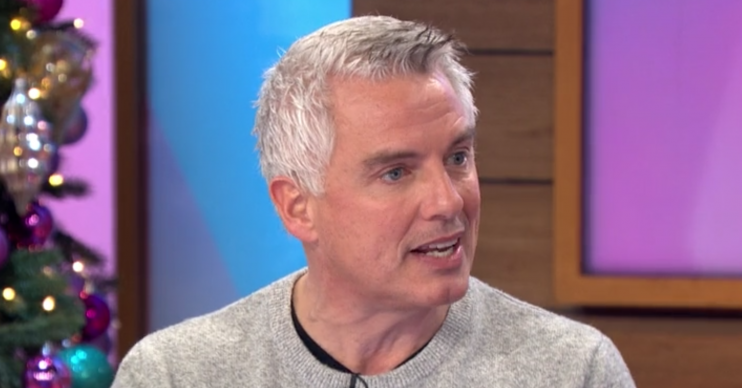 New Dancing On Ice judge John Barrowman received an enthusiastic response from Loose Women fans earlier today after he made a heartfelt plea to TV bosses to boost representation of LGBTQ+ couples in reality shows.

The former I’m A Celebrity star, 52, said he ‘took his hat off’ to ITV and DOI for the “groundbreaking” decision to put same sex couples on the show – and urged more produces to follow their lead.

Looking straight into the camera, he said passionately: “I will say this to all reality shows out there…

“… Being a gay man myself and part of the LGBTQ+ community, [there’s] finally someone on television who represents who I am, looks like myself and my husband when we would skate together or dance together.”

Read more: Harry and Meghan come under fire for ‘Christmas gift given to son Archie’

John continued: “Every reality show on television should have a same sex couple, or a trans couple or something that represents the society we live in today.”

His address was met with whoops, cheers and applause from those watching in the Loose Women studio – but the audience at home also gave his idea the thumbs.

Every reality show on television should have a same sex couple.

Over on Facebook, another supporter gave John their backing, writing: “Yes John! Every show SHOULD have same sex representation.”

‘Every reality show on television should have a same-sex couple or a trans couple or something that represents the society we live in today.’#DancingOnIce judge @JohnBarrowman applauds the ‘groundbreaking’ decision to have same-sex partners on the show 👏👏 #LooseWomen pic.twitter.com/opFpOHS37j

And another person joked on social media: “I agree. I don’t know what all the fuss is about with same sex. I’ve been having the same sex for years.”

Steps’ Ian ‘H’ Watkins will pair up with pro Matt Evers to perform in the upcoming new series of the ITV skating show which begins this weekend.

But fans have already seen “a little piece of history” made after the duo wowed viewers during the recent festive special.

“Never did I think this would happen,” H wrote on Instagram as he thanked fans and ITV for their support in letting him be his “authentic self”.

– Loose Women airs on ITV on weekdays from 12.30pm. Dancing On Ice returns to ITV on Sunday 5th January at 6pm