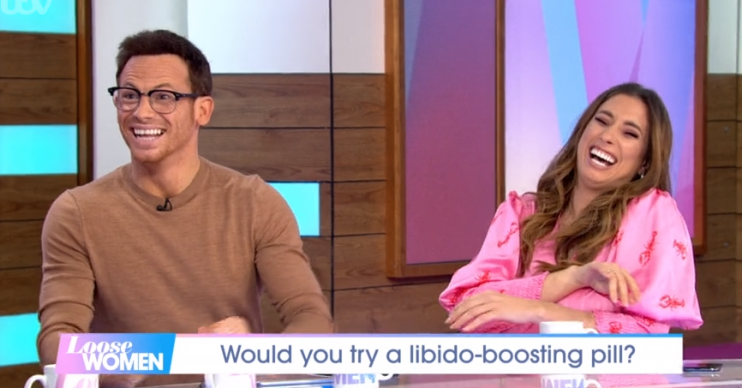 They welcomed son Rex last May

Joe Swash admitted he hasn’t had sex with Stacey Solomon “in so long”.

The couple welcomed their first child together, son Rex, last year and Joe said he hasn’t made a move on his girlfriend in some time.

Appearing on Loose Women on Tuesday, Joe discussed spending a lot of time away from his family as he’s competed on Dancing On Ice.

Joe admitted: “I mean it’s been so long I think I’d be a little bit nervous next time we do it,” as Stacey burst into laughter.

Janet Street Porter asked: “Will you need to have a manual?”

I mean it’s been so long I think I’d be a little bit nervous next time we do it.

Stacey joked: “I think you needed one before,” as Joe looked stunned.

Joe said: “What a liberty! Did you hear that? I’m going to move into yours then Janet.”

He said: “To me, it wouldn’t really matter where it is, I’d just be grateful [to have sex].

“Ruth’s very traditional. Ruth has a time and place for everything – and a night of the week.”

Read more: Stacey Solomon ‘tears’ as her sons visit their dads for the weekend

Eamonn added: “[Ruth’s] a creature of habit, aren’t you darling?”

Ruth said: “I say organise but also quality not quantity.”

Viewers loved having Eamonn and Joe on the panel and shared their thoughts on Twitter.

Absolutely loving the show today!!! Should do #looselovedones more often. The dynamic is brilliant. Such a funny show.

Brilliant show today I’ve not stopped laughing. Loving the banter between them all because theres no nastiness its just fun.