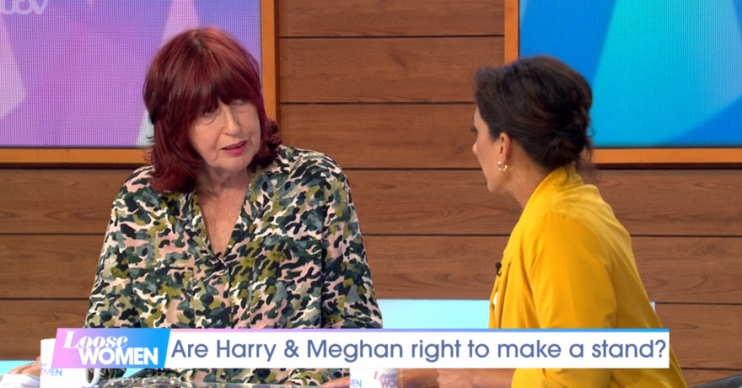 Janet Street Porter and Saira Khan clashed during a Loose Women debate over the Duke and Duchess of Sussex slamming the “relentless” press coverage against her.

Prince Harry issued a statement on Tuesday to announce that his wife Meghan will be suing the Mail On Sunday for “unlawfully” publishing a letter from her to her father, Thomas Markle.

The dad-of-one also compared his wife’s treatment from the media to that of his late mother Princess Diana, who was killed in a car crash in Paris in 1997.

Discussing Harry’s statement and the couple’s decision to sue, the Loose Women panel posed the question: Are Meghan and Harry right to make a stand?

Janet said: “When I read Harry’s statement they say, ‘the double standards of this specific press pack that has vilified her almost daily,’ let’s be clear the vilification that happens daily is on social media.

Saira hit back: “Meghan is a woman of change. She isn’t trying to modernise the royal family, she is a modern woman.”

‘The vilification that happens daily is on social media’.
Our panellists discuss the relationship between the press and Meghan Markle after it has been announced the Duke and Duchess of Sussex are suing The Mail On Sunday. pic.twitter.com/ygEmhxdhUv

Janet said: “We’re talking about Harry’s statement which clearly references what happened to his mother and the death of his mother.

“But before [Diana] died, she entered into a very weird relationship with the press where she on one hand complained about the press but on the other hand, used the press in her divorce from Charles.”

Saira cut in: “Janet, how can that be a weird relationship? [Diana] said, ‘I want you to focus on all the things I’m doing that is good for charities but I want you to keep my personal life out of it.’

“That’s not a weird relationship, that is somebody who is a private person as well as somebody in the public eye.

“I think the only way to be private is to be like Kate [Middleton, Duchess of Cambridge], not to say a single thing and I’m really sorry, Meghan isn’t going to be that woman.”

Janet hit back: “There are all different versions of femininity. We can’t sit here and say Meghan is speaking for the modern woman.

“Meghan is in a very privileged position, she had a successful career before she married into the royal family. There are all sorts of modern woman.”

Saira cut in: “There are. But we shouldn’t vilify one just because she’s showing who she is.”

Janet continued: “She’s not being vilified by the vast majority of the British press.”

As the audience gasped, Saira told Janet: “Well that’s her husband, I’m sure she knows how she feels.”

As Ruth Langsford revealed producers were telling her to move on in her ear piece, Janet joked: “Saira and I will just have a fight in the break.”