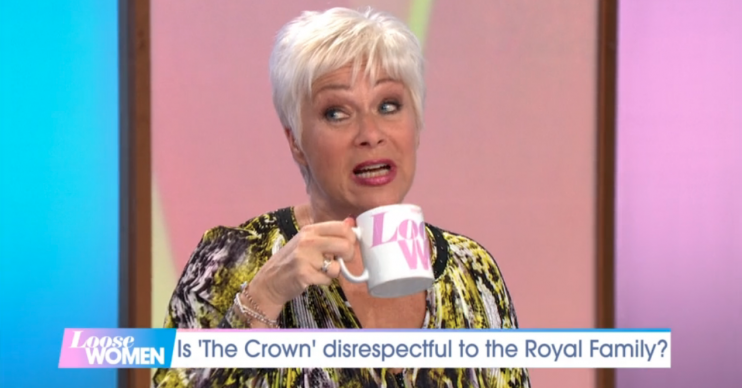 Denise Welch risked getting in a right royal bit of bother on Loose Women earlier today as she recounted a bit of gossip she once heard from a Corrie legend.

Panellist Denise was told to be careful what she said during a discussion about Netflix drama The Crown – but she laughed off the advice as she entertained the studio audience with her friend’s tall tale.

She joked about been giving instructions from show bosses via her earpiece: “It’s so funny my producers are going no names Denzie, no names.”

Denise had claimed late Coronation Street star Betty Driver – who played the much-loved Betty Turpin – was convinced a royal was having an affair.

The TV personality recalled: “She told me that all the time she was working on Corrie she also kept her London flat which had a roof terrace and she used to go up to her roof terrace.”

To shocked but amused gasps from the studio audience, Denise continued: “She used to look over to the opposite roof terrace where a very prominent male member of the royal family used to keep his ‘concubine’… would that be the word?

“They were actually having jiggy jiggy on the roof terrace.”

Denise added Betty had other reasons to believed she had identified the royal correctly – but managed to heed her producer’s friendly warning and not give any more hints about who the rumoured person could have been.

She said: “Not that am I one to gossip, that was according to Hotpot Betty.

“She had other proof that it was the person.

“She made it her mission to find out, put it that way.”

One TV viewer tweeted about the tale: “This was so funny. Do love you on the show Denise. You never fail to make me laugh.”