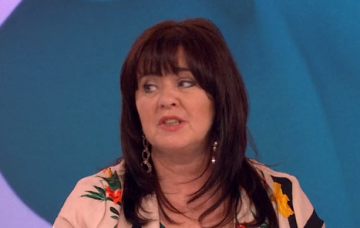 She needed time away

Coleen Nolan has confessed she was in tears for nearly two weeks after she was trolled over her argument with Kim Woodburn on Loose Women earlier this year.

The 53-year-old took some time away from the ITV show following the bust-up, after she received a tirade of hate from trolls online.

Yesterday, Coleen returned to Loose Women for the first time since the drama in August.

She told The Mirror: “I must have cried for ten days after deciding to take a break, and I am someone who doesn’t cry easily. But I think I’ve come out stronger.”

She told her Loose Women panellists Ruth Langsford, Janet Street-Porter and Jane Moore that she was feeling particularly emotional and could “cry” about being back.

The star has also revealed the effect the backlash had on her this summer.

She explained of the trolling: “It’s just horrendous. They almost think they have a right because you are in the public eye.

“At the time I thought, ‘I don’t know how to deal with this’ and that brought to the surface everything I was trying to deal with. I was trying to get my divorce sorted and sell my house. I was grieving for Bernie and Linda’s secondary cancer ­diagnosis.”

Coleen’s not had it easy. She recently split from husband Ray Fensome while also dealing with her sister’s illness.

Kim and Coleen first clashed when they starred on Celebrity Big Brother together in 2017.

During their row on Loose Women, which was supposed to be an opportunity for them to clear the air, Kim did most of the talking, telling Coleen: “You are trash, you’re a piece of filth!”

While Coleen said to 76-year-old Kim: “I should have told you you were vile from day one”.

It then ended with How Clean Is Your House? star Kim storming off the Loose Women set.

Let’s hope there isn’t a round three in store!

Do you think Coleen and Kim should make up? Leave us a comment on our Facebook page @EntertainmentDailyFix and let us know what you think!