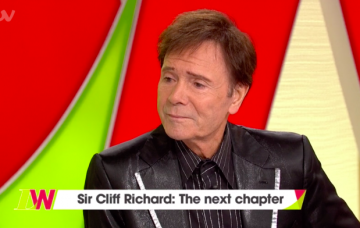 Not many watching at home agreed with him

Cliff Richard has said he agrees with the quote “would rather 10 guilty people escape than one innocent man suffer”.

During an appearance on Tuesday’s Loose Women, Cliff spoke about how he’s moving on after being wrongly accused of historic sexual abuse.

Gloria told him: “You must’ve loved the loyalty over the last four years, especially,” and the 78-year-old replied: “It’s been absolutely fantastic actually. To know that people love you is nice, to feel it is even nicer.

“And I’ve relied heavily on family and friends, and obviously fans.”

Jane said they’d had two or three people on the show who’ve been falsely accused, adding: “And the pressure on them is tangible.”

Cliff replied: “There’s not just a few of them [falsely accused], there’s an army of us. I’ve had so many letters, some people have spent two years in prison and been innocent.

“And that’s the danger – if we don’t change the law, it’s going to keep on happening to innocent people.

He added: “When I was in court with the BBC, I saw a quote that I loved from a Judge Blackstone from way back, which said, ‘I would rather ten guilty people escape than one innocent person suffer.'”

Instead of being challenged, Cliff was applauded by the panel and the studio audience leaving some viewers watching at home in shock.

One wrote: “Cliff Richard is a complete [bleep], what a disgusting thing to say. Doesn’t care though, won’t affect him as he doesn’t have kids.”

Another added: “I had to keep replaying to see if I misheard but Cliff Richard really did say with his chest on #LooseWomen this morning that he would rather 10 guilty sex offenders walk free than an innocent man convicted 😳 disgusting.”

A fourth called it: “The most flawed logic I have ever heard #LooseWomen.”

Cliff Richard saying he’d have 10 guilty sex offenders go free so 1 innocent doesn’t get accused wrongly is so stupid, why not keep the 10 locked away and reform the justice system and control the media so innocent people who are accused have the right to anonymity.

Cliff Richard with the most flawed logic I have ever heard #LooseWomen pic.twitter.com/wRmV77Lfi3

What did you think of Cliff’s comments? Leave us a comment on our Facebook page @EntertainmentDailyFix and let us know what you think.